The governing body of Japan raised caution about power consumption on June 26. This has happened for the first time in the country because of the very hot climates in Tokyo and some areas around it are assumed to put the burden on the government as institutions restart on June 27. 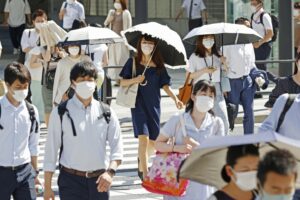 The Department of Economy, Trade, and industry under the government of Japan is specifically appealing to the residents of Tokyo and nearby areas who get their power supplies from Tokyo Electric Power Co. to conserve electricity through various methods which comprise switching off the lights which are put to use unnecessarily from 3 p.m. to 6 p.m. on June 27.

The demand arises after some estimations show that the reserve electricity supply capacity ratio of Tokyo and nearby areas will be reaching not as far as 5% on June 27. While a minimum of 3% is needed for a balanced supply of electricity.

The Kanto area situated in the east of Japan had witnessed the highest temperatures of all time on June 25 and June 26. It was expected that probably the heat waves and High temperature will be endured on June 27 as well. Commercial endeavors which comprise the private corporations too are presumably to rush with the beginning of the week.

Although the government is asking the residents to cut down the use of electricity yet they have urged people to continue using air conditioners as the danger of heatstroke has raised because of the sweltering weather.

As per the Government, Tokyo and 8 adjacent areas which receive electric supply from Tokyo Electric Power Co. are estimated to have a reserve rate of around 4.7% between 4 p.m. to 4:30 p.m. which is likely to fall to 3.7% between the next half hour.

The Ministry also claimed that other companies which supply the electricity in the different areas of the country other than Tokyo and its adjacent areas such as Tohoku Electric Power Co. supplying electricity in the northeast region of Japan might also witness a remarkable power demand this summer.

The reserve rates for power supply are expected to be around 3% eastern, northeastern and central regions of Japan in the coming month while it is estimated to be around 3.8% in the western and southwestern parts of the country.

The governing body’s plan for publishing a caution on electricity usage was proposed in 2022 after an analysis into the acknowledgment of the rising demand for electricity in March 2022. Back then a strong earthquake had caused serious damage in the country pausing the work at a few power plants in northeast Japan.