Jeff Bezos is not nervous at all, even ahead of his historic suborbital flight Jeff Bezos and his brother will go to the edge of Earth along with the oldest and youngest people ever bound for space. 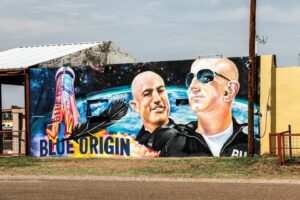 Jeff Bezos, one of the richest men in the world, expressed his curiosity and excitement about the suborbital trip he’s going on today. He told that he is not nervous at all. He will take a flight in his own company Blue Origin’s inaugural suborbital flight alongside the oldest and youngest people ever bound for space.

Blue origin’s New Shepard is a fully autonomous rocket and capsule combo. It is 60 feet tall(18.3 meters). It is bound to fly from a desert site outside the rural Texas town of Van Horn. It will be an 11 minute trip to the edge of space with his three crewmates.

The launch is set for 8 a.m. CDT (1300 GMT). Ahead of the launch, he held televised interviews on Blue Origin’s launch site One facility. This is what he told CBC’s “This morning program”, 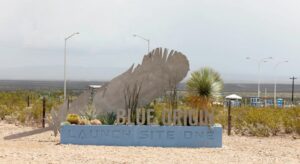 “We’ve been training. This vehicle is ready. This crew is ready. This team is amazing,” Bezos responded. “We just feel really good about it.”
Just 9 days ago Richard Branson the British billionaire took a suborbital flight in his company Virgin Galactic’s flight. Both of them have denied that there is no rivalry between them.

Bezos and his brother will fly with an all civilian crew. Wally Funk, an old pioneering female aviator age 82, and Oliver Daemen, an eighteen-year-old recent high school graduate set to attend University. 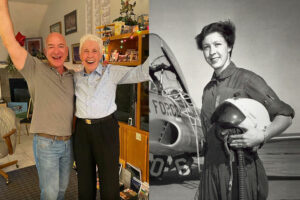 Funk trained to become an astronaut for the first human spaceflight program in the early 1960s, she was part of the so-called Mercury 13. She passed the same rigorous testing as the Mercury 7 astronauts in the NASA space program, although women were denied the chance to become astronauts because of their gender.
Daemen’s father manages an Apollo investment management firm. He has become the company’s first paying customer.

“Back when Wally was part of the Mercury 13, all the testing that she did, she outperformed all of the men,” Bezos said on “Today.” “And we can confirm at 82 years old, she can still outperform all of the men. We’ve been doing the training with Wally. She can outrun all of us.”