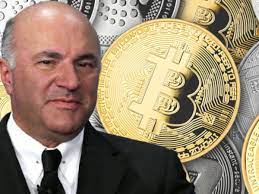 Kevin O’Leary told CNBC that crypto tokens, currencies, and enterprises make up one-fifth of his wealth.

“I have millions of dollars,” O’Leary said in an interview on “Squawk Box,” “and 20 percent of my portfolio is now in cryptocurrencies and blockchain.” Cryptocurrencies have grown in popularity over the last few years, but regulators remain concerned about speculation.

During an interview, one of the interviewers asked whether cryptocurrencies would cease to exist in the next 10 years.

“You have to be diversified. I own 32 different positions, including equity FTX itself. The whole point is, you don’t know who is going to win. Is Ethereum going to win? Is Solana going to win? Is it Helium or is it Avalanche? I own them all,” he replied.

In recent years, cryptocurrencies have received a lot of attention and investment, especially from huge organizations and well-known people like hedge fund manager Paul Tudor Jones and fund manager Bill Miller. Many people recommend bitcoin, the world’s most valuable cryptocurrency by market capitalization, as a long-term investment. There is also a slew of other, smaller digital tokens.

Bitcoin has just been around since January 2009, according to crypto supporters, so it’s still early days for the business. Despite this, crypto businesses continue to draw billions of dollars in venture capital funding.

Simultaneously, the new asset class remains volatile, with authorities such as Securities and Exchange Commission Chairman Gary Gensler warning of its “very speculative” nature and lack of investor protection. The U.K. regulator has also warned about pump-and-dump schemes in certain digital tokens.

There are other people who have previously expressed skepticism regarding cryptocurrency. On the other hand, some people have gradually come to believe. Don Tapscott, Niall Ferguson, Joe Weisenthal, and Kevin Roose were all once skeptics of cryptography before becoming believers.

Ricardo Salinas, a Mexican businessman, claimed in late 2020 that Bitcoin made up 10 percent of his liquid assets. The Bitcoin educator Saifedean Ammous wrote the best-selling book “The Bitcoin Standard,” which he suggested potential investors study.

A family office of billionaire Simon Nixon, Seek Capital, announced its intentions to increase its exposure to crypto in August, stating it would be an important part of the future. Bill Miller, a fund manager, recently stated that Bitcoin and other cryptocurrencies account for around half of his personal holdings.