Kia EV6 crashes and bursts into flames in Hungary 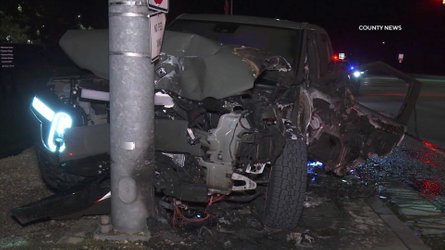 Much like the cause of the accident, the origins of the fire are unknown, but it has been well-documented that damage to high-voltage cables can cause a vehicle to catch fire and that lithium-ion batteries, like the ones that power the EV6, can be very difficult to put out once they erupt into flames. If this was an all-wheel-drive model, it’s possible that the collision caused damage to the electric motor at the front of the vehicle and its related high-voltage parts but no such information is available at this time. As pointed out by InsideEVs, the fire does not appear to be emanating from the batteries.

This issue may be sensitive to Kia, in particular, which is on the verge of a major EV push. Its sister brand, Hyundai, was also recently involved in a debacle related to its electric vehicles as the Kona Electric was recalled over a fire risk and the company faced a backlash in South Korea for having been perceived to not have done enough to remedy the situation.

Though the data says EVs are less prone to fires, it is the statistics and there is no confirmation of this on a larger scale. Also, the data on hybrid vehicles is not available. However, when a crash does occur and the car is damaged, it is dangerous and causes injury or sometimes death of a person inside the vehicle. There are some instances when an EV is more dangerous in a crash. We are specifically referring to any impact that affects the battery pack or any of the vehicle’s high voltage cabling, which is what probably happened in this incident from Hungary.

From the grainy, low-quality video it is unclear to make out just how much damage the car had suffered, or where exactly the fire originated. The blaze does appear to be concentrated in the front of the Kia, but it’s not coming from underneath the vehicle. So maybe the battery had yet to catch fire or only the front modules had been affected when the video was shot.