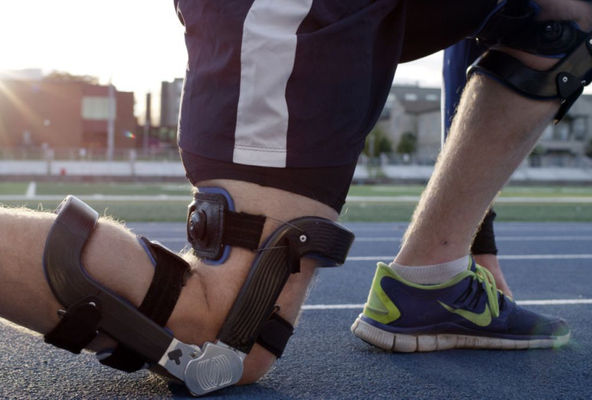 12 January, 2016, Canada: Knee injuries are very common for athletes, players, sportsman and even for  common man. When knee injury occurs the person becomes helpless as even a slight tweak of leg can add pain to his agony. To provide a proper remedy to this concern, a Canadian startup ‘Spring Loaded Technology’ has launched its world’s first bionic knee brace.

This light weight knee brace called ‘Levitation knee brace’ is developed on the similar lines of other knee braces. Though it looks like an ordinary knee base, but it has a unique feature of storing kinetic energy when a user bends her knee so, she receives an extra boost and support when they straighten their leg again.

The company, before launching its product, gave its demo in a recently concluded Dublin Web Summit. The product created a lot buzz in the summit and visitors were looking very keen to see its launch on the practical grounds.

“Along the way we tried metal springs, polymers, and even gas springs, none of which were quite right. Eventually, we developed a new type of liquid spring that allowed us to keep our brace light, powerful, and compact. We wanted to create a powerful spring-loaded knee brace that was affordable and could benefit everyone,” said, Chris Cowper-Smith, Scientist and CEO, Spring Loaded Technology.