Porygon was created by state-of-the-art technology and is the first artificial Pokemon to be created via computer programming. Porygon has the job of going around making sure that there is no suspicious data that exists in the Pokemon world. It is a peculiar bird-like structure with angular features, it is 2′ 07″ and weighs 80.5 lbs. Porygon has a defense mechanism that is similar to that of ‘tit for tat’ in game theory, the Porygon tends to imitate the defense strategy and ability of the opponent. 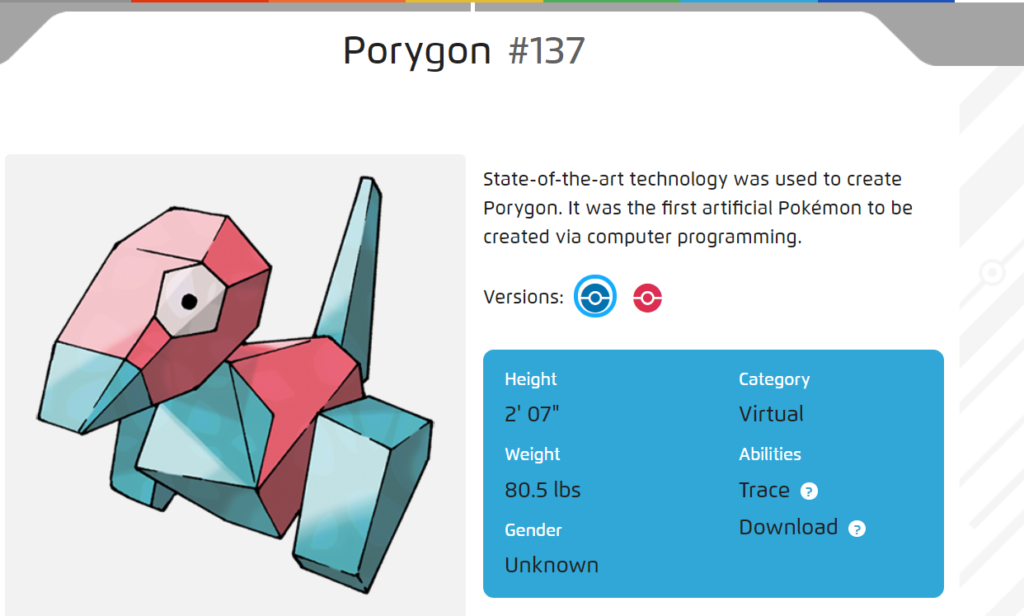 The flow of time has been disrupted! Dialga is appearing in five-star raids, and Pokémon from various eras are appearing more often as part of the Ultra Unlock Part 1: Time event! https://t.co/wG8OzlgzRb pic.twitter.com/RXjTci4irO

How to evolve Porygon Pokemon

Porygon evolves into Porygon 2 in the main series through hand-held trading similar to other Gen 2 Pokémon like Steelix, Politoed, and Kingdra. Pokémon Go is different a little different: you’ll need the same evolutionary item, the Up-Grade, and the specific amount of Candy to evolve your Porygon into Porygon2 which is 1 Up-Grade and 50 Porygon2 Candy. When you have what is necessary, Go to the usual spot in the in-game menus and your Pokemon will evolve.

For Pokemon Go, you will need to walk your way through collecting and finally upgrading your Pokemon. Similar to other new evolutionary items such as the Dragon Scale, Metal Coat, King’s Rock, and Sun Stone, the Up-Grade can only be acquired through random unexpected drops from a Pokéstop.

Porygon-Z has a program installed to help it travel through dimensions but the program is said to cause instability in the character. Porygon’s ability lies in its method of defense. It compares the defense of the opponent and its own to come up with the best strategy.

Remember, Trainers! Evolve Porygon2 (the evolved form of Porygon) during this month’s #PokemonGOCommunityDay or up to two hours afterward to get a Porygon-Z that knows Tri Attack! pic.twitter.com/xUuniYHi42

It has been 5 years since the release of the game Pokemon Go and the hype has not yet died down. Since the initial release in 2016, the game has been downloaded across Android and iOS devices 632 million times. The game has made Niantic over $5 billion in revenue. the game has made $1 billion in 2020 and users have spent over $600 million in Pokemon Go as of yet in 2021, 30% of which has gone to Apple and Google as in-store charges.