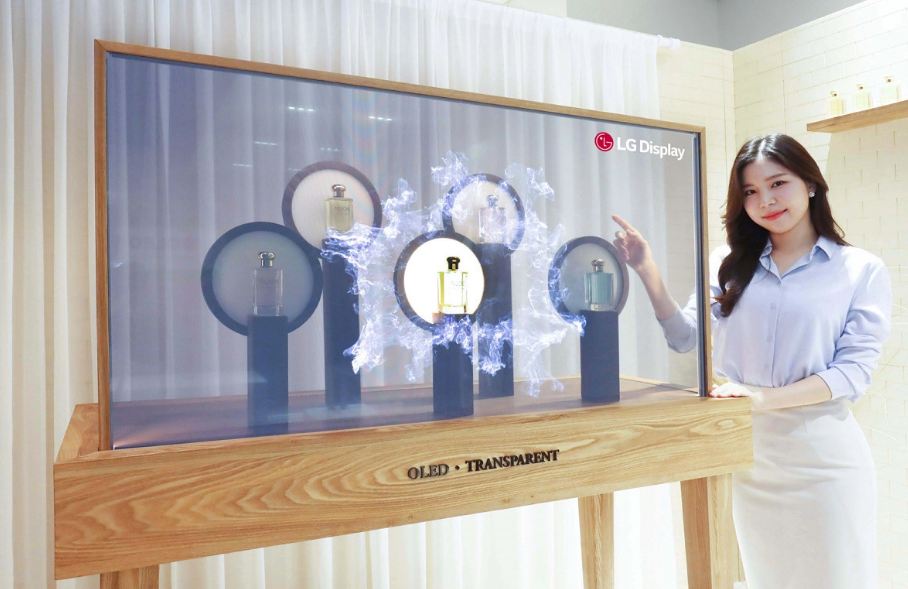 With its revolutionary new concepts that will be on show at CES 2022, LG Display has come up with further uses for transparent screens: the OLED Shelf, Shopping Managing Showcase, Show Window, and Smart Window. LG Display is not to be confused with LG Electronics; the firm just develops concepts that other companies might use and commercialize.

The company’s OLED Shelf, which can be seen at the top of this post, is made up of two 55-inch transparent OLED panels put on top of one another, with a shelf at the very top. LG Display claims it’s perfect for the living room, where it can show art, a TV show, or both on both displays at the same time.

There’s even room behind the screens for you to hang a real artwork, which you’d be able to view when they’re turned off. To make their visuals more colorful and less ethereal, LG developed a motorized sheet of opaque material that rolls down like a projector screen. Some of the electronics are housed on the pedestal seen above, and the displays accept normal HDMI input.

LG Display’s Shopping Managing Showcase is meant for “luxurious” department stores, according to the manufacturer, while the OLED Shelf is for the home.

A transparent OLED display connected to a sleek wooden plinth looks to deliver a futuristic shopping experience when placed in front of physical products.

It creates an overlay on the things behind it, allowing store owners to apply images to highlight specific features of their products or even utilize the display to create quirky visual effects. In a movie, flowing graphics pulled our attention on one of the perfume bottles in the display above, creating a dazzling halo effect.

LG Display also showed off its Show Window, a business-oriented model that comprises four 55-inch clear OLED displays that could be used to highlight items in window displays instead of using decals. Instead of decals, retailers could use digital text that can be readily altered at any moment.

Versions of it are currently on display just at the newest Musinsa fashion shop in Seoul, and also art shows at The Smithsonian and 180 The Strand in London, subway car windows in China and Japan, and a Bulgari fashion show, according to the business.

The business also demonstrated its Smart Window, a transparent OLED panel that can be used for video conferences or presentations in the office, but no photographs of the display were provided.

We won’t see many of these transparent displays in the real world since they’re just ideas, but that doesn’t change the fact that they’re still really interesting to look at – and LG Display says it’s ready to assist clients to make some if they want.

“We can deliver [the OLED Shelf] to any of our customers,” LG Display spokesman Jean Lee tells The Verge, adding that it is ready for manufacturing.

The same 55-inch 1080p clear OLED panels with 40% transparency is used in all of these displays, according to Lee, who claims the business is on its 8th generation display production process.

LG Display has been a long-time player in the transparent display game, presenting its first flexible and see-through screen in 2014 and, more recently, a transparent TV screen set at the foot of a bed.

But it’s not only about transparent panels; at CES this year, the business is displaying a half-moon-shaped chair with an integrated OLED screen.