When it came time to choose a new location for its U.S. headquarters, Blockchain.com chose to leave New York and relocate to downtown Miami.

“New York is a fantastic city,” says Peter Smith, co-founder, and CEO of the cryptocurrency firm. “However, Miami was a no-brainer for us.” The city’s busy nightlife and warmer weather were appealing, but Smith says the decision came down to the city’s aims being more aligned with his company’s. 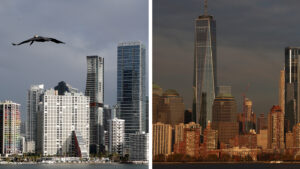 He describes it as “the doorway to Latin America.” “The time zone is Eastern Standard Time. And, perhaps more crucially, it is currently the most enthusiastic city in the world about cryptocurrency.”

Many people believe that cryptocurrency is the way of the future of money, and Miami is vigorously pursuing its goal of being the world’s crypto capital – posing a direct danger to New York’s standing as the country’s financial center and challenging the city’s financial domination.

Mayor Francis Suarez, according to Smith, is responsible for increasing the city’s profile. Suarez has invested heavily in Bitcoin and blockchain, the technology that underpins it, during his first term.

In a recent interview with NPR, Suarez said, “Crypto is tremendously crucial to the future of the city, and to how we are positioning ourselves right now.”  Suarez has honed his pitch to investors and executives, such as Smith. He starts with the beaches, cultural activities, and professional sports teams that Miami has to offer. Then he gets down to business.

The city’s real estate taxes have been slashed “to the second-lowest level since the 1960s,” according to the mayor, and it has more opportunity for future development than New York. Suarez is also pleased to mention that credit rating agency S&P Global Ratings recently upgraded some of Miami’s bond ratings.

His strategy appears to be working. FTX US, eToro, and Bit Digital have all declared ambitions to expand in Miami, while MoonPay and Orca Capital have already set up shop.

Even more traditional financial institutions are flocking to Miami. Citadel Securities relocated employees to South Florida during the pandemic, and Apollo Global Management is establishing a new office.

“In the last 16 months, we relocated nearly $1.2 trillion in assets under administration to Miami,” Suarez adds. Miami’s success concerns Eric Adams, the mayor-elect of New York City, who thinks that “the city that never sleeps” is sleeping on cryptocurrency.

“The Bitcoin sector, as well as other fast-growing, innovative industries, will be centered on New York!” On Election Day, Eric Adams sent out a tweet. “Just wait!”

Adams doubled down when Miami’s mayor pledged to take his next paycheck in bitcoin. Alternatively, it might be tripled. “In New York, we always go big,” he declared, “so when I become mayor, I’m going to take my first THREE paychecks in Bitcoin.”

This sparked a fuss and made headlines, but it became evident hours later that New York City can’t pay employees in anything other than dollars. Not right now, at least. (While Adams seeks to amend the city’s payroll policy, a representative for the mayor-elect says he will convert his own income into bitcoin in the meanwhile.)

Adams has yet to provide any concrete recommendations, despite declining NPR’s request for an interview. However, he has proposed that crypto be included in the curriculum of New York City Public Schools, claiming that if the city embraces crypto, it will lead to higher-paying jobs.

On January 1, Adams will be sworn in as New York’s 110th mayor. Suarez, in the meantime, has some counsel for him.

“Hold on tight,” he advises. “There will be a lot of changes. And, believe it or not, being second isn’t a bad thing.”