List Of Best Features In Android 12 Which Will Soon Be Coming To Your Phone Google launched Android 12 with new features, here we have filtered out few best features which will love when Android 12 updates comes to your phone, checkout to know 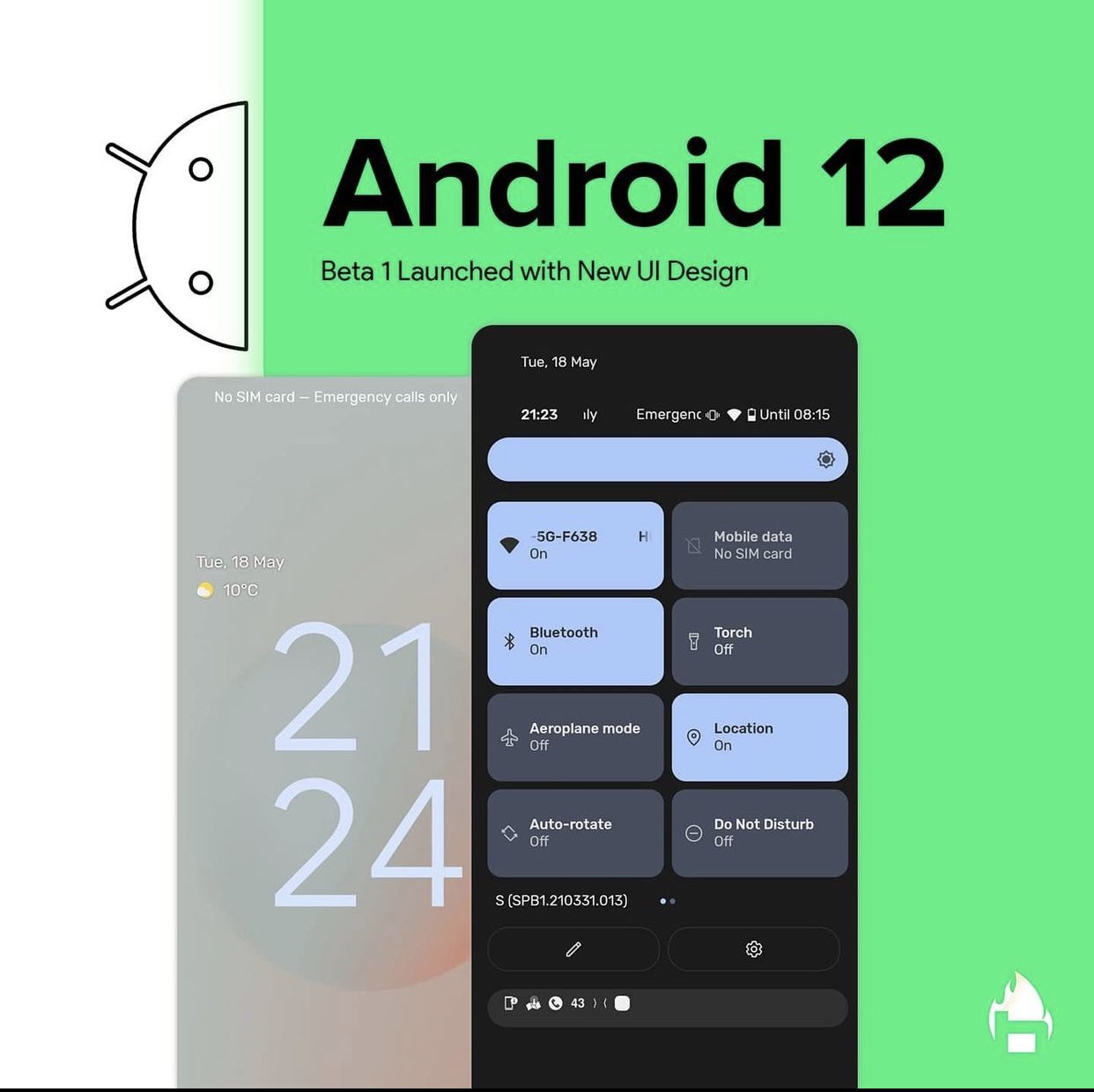 Google has officially launched the first Android 12 beta for Pixel phones and select devices from partner OEMs at I/O 2021, after three developer previews. The upgrade includes a slew of additional features and bug fixes designed to better user experience even more.

If you don’t even own a Pixel phone and can’t load the Android 12 beta on your device, as you are here, you’re probably curious about what to expect from Android 12. So, let’s talk about the best new Android 12 features that will be available on your Android devices. 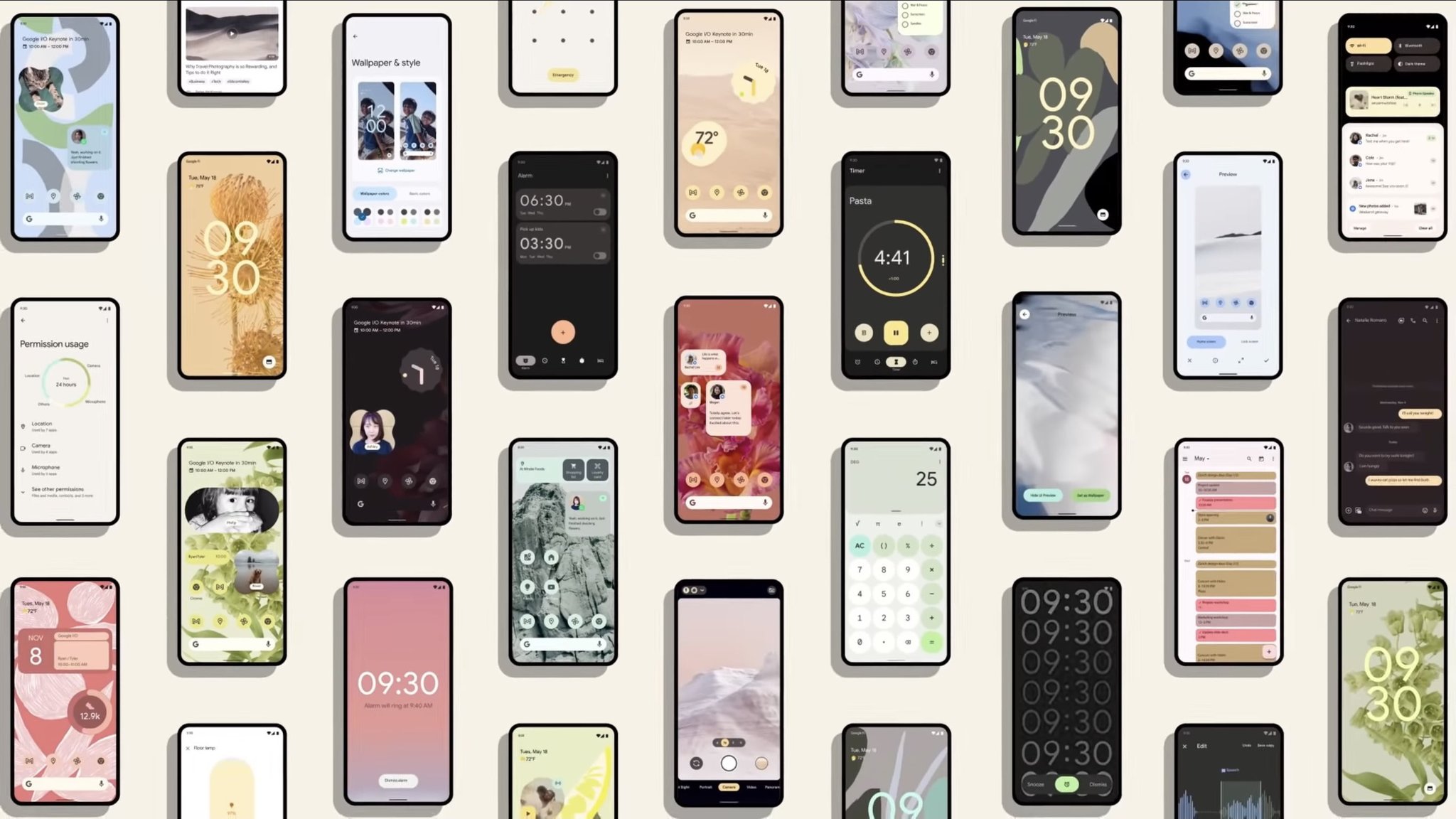 There have been plenty of features addressed by Google in all-new Android 12 but we have filtered out the best among them which you will for sure appreciate as an Android users.

Google has made significant changes to the alerts shade on Android 12, as with all Android updates. And, well, it’s fair to say that a lot has changed since the developer preview builds were released.

The first beta build contains early indications of Google’s Material You design language, which primarily updates the look and feel of the warning shade and simple settings screen.

Anything has been rounded up, and Google has gone for an invisible notification hue context.

Furthermore, each notification has a snooze button that can be used to easily snooze it for 15 minutes, 30 minutes, or 2 hours. This is one of the strongest and most noticeable improvements in Android 12.

The Quick Settings panel is where you’ll find a significant dramatic design change in Android 12. Android has abandoned the traditional lightweight QS toggle in favour of very chunky toggles with text.

However, there is some positive news. Although the latest toggles seem to be slightly (significantly) larger than the existing ones, you get more toggles on one page.

To note, Android 11 famously shortened the number of rows on the QS list from three to two, resulting in just six buttons rather than nine at the end.

Even so, with the latest Android 12 beta 1, you have a maximum of 8 buttons divided into 4 rows of two buttons for each column.

Furthermore, the toggles in the “off” condition are now a derivative of the system accent rather than grey tone.

If your machine accent colour is blue, for example, the disabled QS tiles will now be a pale blue colour, adding accuracy.

Another enhancement is the inclusion of a QS toggle for the latest “Extra dim” usability mode, which allows you to easily minimize brightness.

With Android 12, the persistent media player has had a big makeover. The album artwork is given greater prominence, and the total scale of the publicity monitors has increased.

In addition, the user name in the media player UI has been replaced by an icon in the top-right corner that, when tapped, activates a pop-up to help you easily pair a Bluetooth headset. 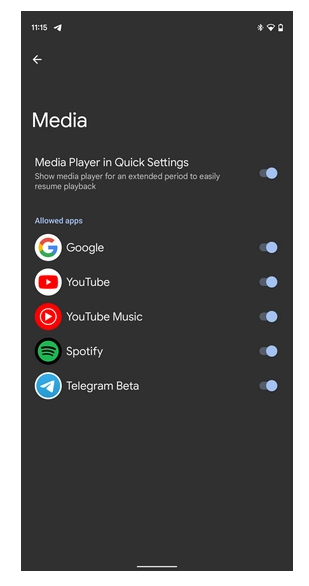 Another long-overdue enhancement is the option to uninstall individual music applications from the simple settings media controls.

The functionality is similar to Apple iOS 14’s reachability, which only shows information on the lower half of your phone. 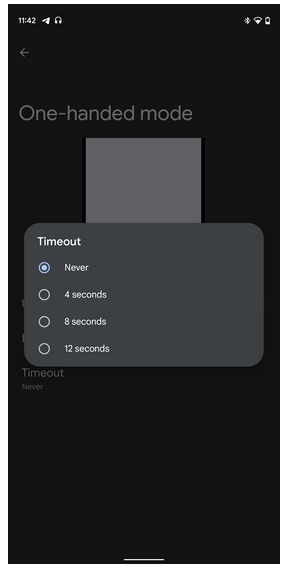 Furthermore, you can set one-handed mode to switch off while not in service. There are four timeout options available: never, 4 seconds, 8 seconds, and 12 seconds.

The first beta build has several problems with revealing all of the content while in one-handed mode. However, it is expected to be patched in future betas, making it one of the better new features for Android 12 users.

You may have seen the latest Android 12 lock screen at Google I/O 2021 last night, and it is now available on the first beta version. When there are no pending updates, the lock screen displays a large clock and a small date indicator: 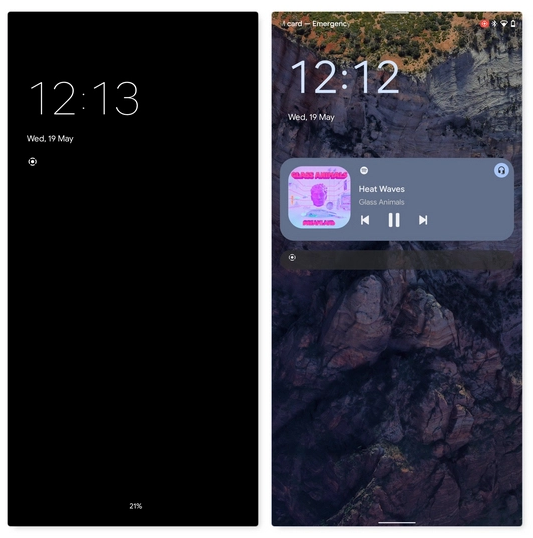 This, though, is not always the case. When you have an active notification, the lock screen interface becomes more compact, with the clock located in the top-left corner of the screen. 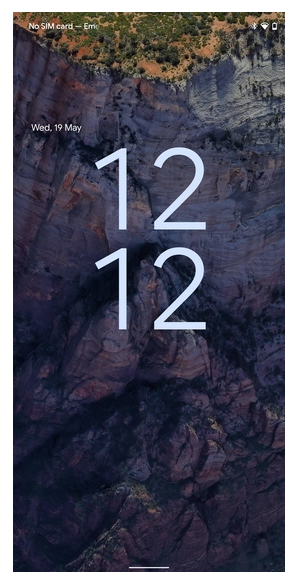 A new look for the PIN and pattern input UI on the lock screen is another subtle but visible improvement. The 911 call button is now more visible and suits the machine voice. 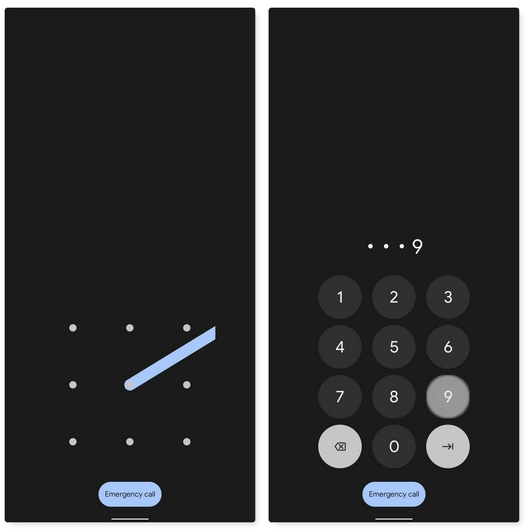 Pattern lock users will find that the trail when drawing the pattern is thicker in Android 12.

Google has adopted a OneUI-like interface for the Settings software, which is best designed for one-handed use. 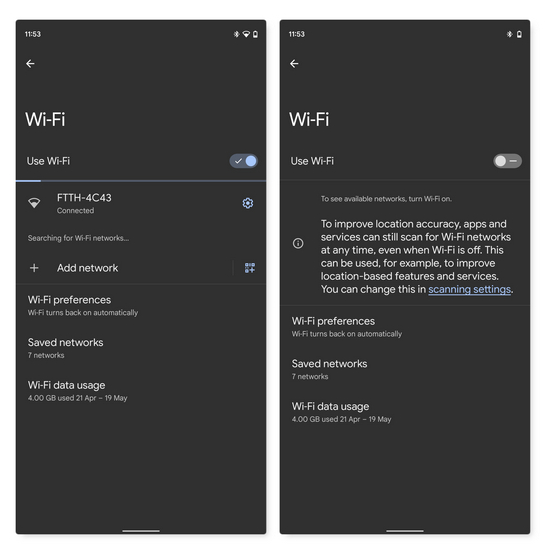 The elimination of text under each setting menu makes it seem much clearer and less cluttered.

In Settings, you also get toggles with pill-shaped state markers through different high-level components.

A cool sparkly ripple effect animation that occurs when you press on various menus and toggles is one of the latest features in the first Android 12 beta. There is currently no way to customize the effect, but it will be supported by default across the UI. You can have a look at new animation gestures which were shared by users who get Android 12 update.

The #Android12 beta's volume panel is still separated, but Google is testing a version where the ringer toggle is part of the slider. pic.twitter.com/1nLsovvZ3F

The new #Android12 lock screen transition is pure beauty – what a joy to unlock your phone. The variable font animation is so extra and I'm here for it. 🤩 pic.twitter.com/WPwimmbiCv

Google is expanding the ability to exchange Wi-Fi passwords with other Android users with Android 12. You will also use Nearby Share to share Wi-Fi credentials in the future.

Google has long been dismissive of the presence of widgets on Android.

However, with the addition of widget support in iOS 14, the company is attempting to enhance the widget experience on Android 12.

Android 12 introduces a new widget picker UI. Notably, the current user interface is lightweight and displays the amount of widgets provided by an app.

You can also use the top search bar to look for widgets. Furthermore, with the launch of Material You build later this year, we should expect many software developers to update their widgets in accordance with the latest design language.

If this is so, we will consider Material You widgets to be one of the best new features in Android 12.

Android 12 introduces a splash screen for all applications in the third developer preview in an effort to increase general stability in the operating system. This is a nice touch and a slight UX upgrade that makes the OS feel more smooth.

Google also included a slider that allows you to activate the Assistant by holding down the power button.

As of this writing, the feature replaces power menu controls and cards & transfers, according to the first Android 12 beta. It’s fair to say that the company will find a way to include these capabilities in future builds.

Aside from these modifications, Google has enhanced the markup tool. Text will also be added to photographs. In addition, you can now import and edit any image from your gallery using the markup app. To do so, post the picture and then click the “Edit” button in the share sheet.

While the first developer preview build introduced emoji support to the Markup tool, Google disabled the option to add emoji’s in DP2 and it remains absent in the first test. We should expect emoji support to return in upcoming builds. 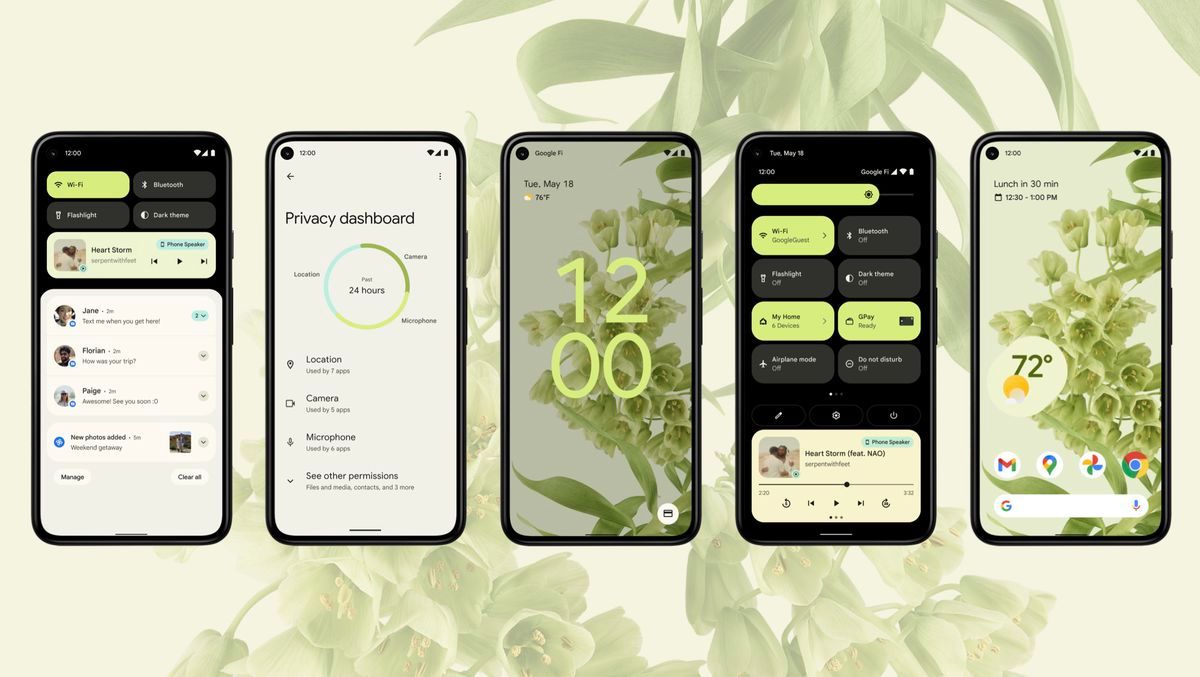 Above mentioned were all the features announced but there are some of the features which are in works and are hidden by default. We will be listing out few of them but it’s not quite sure that all of the listed features will make its way to the final build which Google hopes to release in the second half of this year.

On Android 12, Google has been working on a wallpaper-based theming scheme codenamed ‘Monet.’ The updated theming scheme alters the accent colour depending on your wallpaper and adds it to the whole interface. It is not, however, available in the first Android 12 beta.

Since the company announced the feature as part of the Material You design at Google I/O, it should be supported by default in future builds. It will first be available on Google Pixel smartphones, then on other OEM devices during the year.

Google is making it simpler for users to keep track of applications that have accessed permissions such as camera, microphone, position, and others. With Android 12, the company is introducing a “Privacy Dashboard” that displays all of the applications that have recently accessed your data, along with timestamps. It is not actually available in the beta version, although it should be available in future releases.

Google can include privacy markers that help you recognize whether your camera or microphone is in use, as first seen in leaked screenshots.

You’ll also get two new QS toggles to disable app access to these sensors. Before then, you can use applications like Access Dots to emulate the functionality on your Android computer.

Scrolling screenshots are still a bit janky/broken, but it actually works! (It's not enabled by default so you won't see it when you update.) pic.twitter.com/7ih2zQgvZk

Google can begin displaying icons for pending app installs on your home screen in a step that closely mimics iOS. The element, which was discovered by Twitter user Brae, is not widely accessible (via XDA Developers).

Google is planning on adding a toast message to inform you if an app accesses your clipboard, similar to iOS 14’s clipboard access warning. This functionality is not yet available, but Google mentioned it during one of its developer sessions.

Google seems to have included a Game Dashboard widget in the second developer preview. This feature allows gamers to start a live stream via YouTube Live, take screenshots, record the screen, display the FPS counter, and enable DND mode.

Google is still working on the conversation/people space widget that was leaked in the Android 12 paper. You may use these widgets to keep track of recent posts, missed calls, and operation statuses for specific contacts. The widget appears like this in the second Android 12 developer preview:

Face-based auto-rotation is the Android 12 feature that has piqued my interest. It detects while you are staring at the phone with the front camera and changes the screen orientation accordingly. It will be useful when using the phone in bed, preventing any unnecessary auto-rotations to landscape mode. Those can be very vexing.

Google can provide double-tap back movements in Android 12, at least on the Pixel 5. If you have a Pixel 5, you can access the functionality by going to “Settings -> System -> Gestures.” Once enabled, the double-tap gesture can be used to open Assistant, take screenshots, monitor media playback, open the recent applications switcher, and check alerts.

But those are the best Android 12 features you’ll get when it comes out later this year. Though most of these features are already present in custom skins, it’s nice to see that Android 12 has them by default.

Check out our linked article if you’re curious when your Samsung, OnePlus, Asus, Xiaomi, or Realme smartphone will receive the Android 12 update.