On Wednesday, Bitcoin fell for a second day as speculators took gains after this week’s record highs, while smaller rival Litecoin rose for the fourth day in a row, bolstered by movie theatre chain AMC Entertainment’s announcement that it will likely accept payment in the currency before the end of the year. 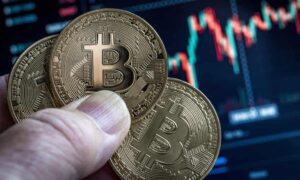 According to Coinbase data, the top cryptocurrency fell below $67,000 after hitting an all-time high of around $69,000 the day before but was still up 6 percent week-over-week.

“After recent gains and a look-around, such a pullback implies an attempt to profit. The fact is that sales had won the day before on the market, thus tipping the balance of power in favor of the sellers “According to Anton Gulin, regional director of AAX Exchange.

Meanwhile, at 6:15 a.m. ET, Litecoin had gained more than 8 percent in 24 hours to trade over $275, bringing its seven-day gains to 31percent on Coinbase. AMC CEO Adam Aron said on Monday’s earnings call that the cinema chain was on schedule to accept bitcoin cash and Litecoin payments by the end of the year, in addition to Bitcoin, ether, and dogecoin. Bitcoin cash was up 5.2 percent at $701.40, putting it on track for a 16 percent week-over-week gain.

Litecoin is one of the best-performing cryptocurrencies this year, up 470 percent, trailing only ether (up 570 percent) but ahead of bitcoin (up 130 percent). Litecoin has been popular among retail investors and companies due to its lower energy consumption, lower transaction fees, and faster network performance. Altcoins have seen a surge in popularity this year as investors seek out less expensive alternatives to bitcoin.

Ripple Labs, whose network hosts the XRP token, is also likely to have helped Litecoin. In a news release issued on Tuesday, the company announced the establishment of a liquidity hub that will allow financial firms to provide their clients with access to cryptocurrencies such as Bitcoin, Ether, and Litecoin, as well as Bitcoin cash, ethereum classic, and XRP itself.

“To bring the first big resistance level at $282 into play, Litecoin would have to escape the $256 pivot,” FXEmpire technical expert Bob Mason said. However, Litecoin would require support from the larger market to break out from Tuesday’s high,” he added.

Also read: Google may be forced to pay all iPhone UK users up to £750 in compensation for secret tracking by the Supreme Court