How many people are open to talk about suffering from depression? Hardly a few. It needs courage to discuss about problems related to mental health for the sheer reason of being subjected to mockery and the stigma associated with them. In India, especially, people are hideous of the fact that they are jostling with such problems, thanks to the popular view that society looks down upon those who are grappling with one. 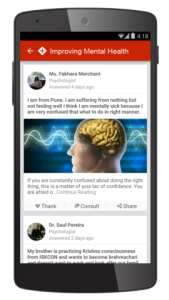 How true is that? Perhaps, to a great extent. We as a society are yet not encouraging and supportive of those who are dealing with such issues. Times, undoubtedly, have changed comparatively from the past and we have become more receptive, but it is a stark truth that as a society we still don’t respond positively to mental illnesses. Urbanization and modern outlook have brought about the change in mindsets, but nothing much has really improved as the number of aware people just remains to be a handful. The situation particularly is much worse in smaller towns and cities where people are oblivious to mental health diseases altogether.

The problem: Taboo and unawareness

Because of the unawareness and the taboo that come along who are at the receiving end? It is those who are suffering from one or the other mental health issue. Not opening up to families and friends and avoiding medical help make them silent sufferers. The fear of simply being labelled “abnormal” is one major reason people keep themselves under the shell and shy away from opening up to discuss their problems out. If family members seek professional help, effort is made to keep everything under the wraps, safely away from the public view.

While there are multiple number of mental illnesses, the most common anyone can relate to is depression. It is so much a talked-about issue today. Given the hustle bustle, fast-paced lifestyles and the pressures of daily juggling, each one of us become a victim of depression at one point or the other. Some are able to cope with it, some can’t. There are many who do not concede to being depressed and camouflage acting absolutely normal, a behavior which is far from reality for many.

In all this, what people forget is that mental problems are like any other disease and call for professional assistance. These issues are as genuine and real as others. However, when people are okay seeing a doctor for any other health problem, visiting a psychiatrist or seeking counselling is something they are just not fine with. The very fact of friends, relatives and peer group coming to know of doing so is a shuddering thought, again for the same reason of being made fun of and being called abnormal.

Sometimes the thought ‘How can I be having this problem’ or ‘I am strong’ push people away from taking medical help. Whatever the reasons are, it is a reality that if medical assistance is not sought in time, the problems acquire an acute shape, which not only ruin the mental health but takes a toll on the physical well being too. One problem that could well be nipped in the bud in the initial phases take a gigantic form because of ignorance and shame.

Noticing the bottlenecks that stopped people from consulting doctors for mental problems, Lybrate was designed to keep their identity anonymous. With Lybrate, people have found a medium to consult renowned psychiatrists and psychologists for their health problems without worrying about their personal information being revealed. The feature of anonymity in the Lybrate app encourages people to come out in the open and seek professional help and take informed decisions.

Lybrate receives more than 1,000 queries daily related to various mental health problems. The platform has provided a window to all those who felt stifled due to bottling up of their health concerns and looked for a convenient and simple solution.

We have also seen that people do not take action on their health issue or stay ignorant until they bump into somebody facing the similar problem. Lybrate’s unique Health Feed, which is a combination of health tips from doctors themselves and the questions that are being discussed on the platform, is an ideal source for any idle user to keep a tab on what sort of problems people suffer from. If they connect with anyone of them, it pushes them to take action promptly. The Health Tips on the other hand are the authentic ways that people take note of to lead stress-free and mentally-fit life.

The sheer size of online consultations through Lybrate for mental problems shows how big was the need for such a platform. Lybrate has successfully filled the void and addressed a very ‘serious social issue’ concerning health about which people do not talk in public, simply because they are considered taboo subjects in India.

Lybrate’s aim is to democratize Indian healthcare and we have taken the first step towards providing a key solution to a big issue pertaining to mental health.

It is time that society changes its perception about people with mental illnesses and rather encourages them to seek medical help, before it is too late for them.

The article is contributed by Saurabh Arora, CEO, Lybrate.

(Disclaimer: This is a guest article. Techstory is not responsible for the content in this article.)