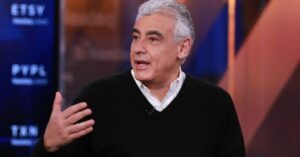 The Co-Founder and CEO of Avenue Capital Group, Marc Lasry is known for his prediction on the crypto currency in 2018. Lasry precisely predicted that Bitcoin would reach $40,000 in future, but he never knew that this growth will happen in less than 3 years. In an Interview with CNBC’s Squawk Box, the Billionaire confessed that he wishes he had bought more bitcoins. “The probability as more and more people keeps using bitcoin it is going to keep moving up. It’s happened a little bit quicker than I thought it would. I should have bought a lot more,” said Marc Lasry.

“The probability as more and more people keep using #bitcoin it is going to keep moving up. It’s happened a little bit quicker than I thought it would. I should have bought a lot more,” says Marc Lasry. #btc pic.twitter.com/qICVIzs61R

According to Mr. Lasry, Bitcoin will rise to $125,000 in the coming future and this was his latest prediction but at the same time, he also argued that the value of the cryptocurrency might fall to $20,000. Lasry’s predictions proved to be accurate, especially when it is about bitcoins. Looking at the frequent shifts in the bitcoin in such a short span, it is expected that bitcoin might face a huge correction and could plunge to $20,000 which will again prove Lasry’s prediction to be right. During his interview with CNBC’s Squawk Box, Lasry also said that “Once a market is created, it’s there”.

American Billionaire Lasry is also the co-owner of an NBA team called Milwaukee Bucks and known as the hedge fund manager. As a matter of fact, Lasry’s net worth includes approximately 1% bitcoins and this was disclosed by him during an interview in July 2018. In the year 2018, the trading value of Bitcoin was $7,400 which jumped to surpass $60,000 in Jan 2021. The reason behind the rise of bitcoin in the past years is the mainstream adoption of the currency and especially, Elon Musk’s announcement of accepting bitcoin as payment in Tesla. The soaring value of bitcoin over the past few months is making a lot of investors regret not buying the cryptocurrency on time.

The statements by the popular crypto analyst, Lark Davis also support the latest prediction of Lasry, as Davis also believes that Bitcoin could plunge before rising. Though, Lark Davis also mentioned that Bitcoin will not fall below $28,000 at the same time. Bitcoin does not witness any stability usually, but looking at the predictions by the experts and the trends, Bitcoin could be a good investment for those who invest in CryptoCurrency.