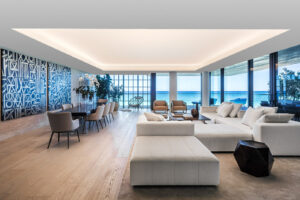 The record-breaking deal of the shiny & luxury penthouse on the Miami beach left the entire real estate industry surprised. An anonymous buyer purchased the penthouse for $22.5 million which was more than all the previous deals on Miami Beach, and the surprising element is, the buyer paid the entire amount in cryptocurrency, making it the largest cryptocurrency purchase in the real estate industry to date.

A few weeks back, the developers of the property announced that they will be accepting cryptocurrency as payment for their property at Arte, and since then, they received more than a dozen calls of qualified buyers for the property which is a signal that people are adopting cryptocurrency in the mainstream. Notably, the entire blockchain deal took less than ten days time, from start to the end, which is also a record in the history of the real estate deals for both buyer and the seller, and this indicates that the cryptocurrency transaction for the real estate deals saves a lot of time.

This deal is a call for the entire Real Estate Industry regarding the future of transactions in the real estate deals, The Industry must understand that Crypto is here to stay, so the dealer better fastens their belts and get ready to lead this transformation. It has been observed that Miami is emerging as a growing hub for the Cryptocurrency Market.

Alex Sapir, developer of the property said that “We were overwhelmed by the number of calls we received from qualified buyers, Real-world crypto transactions haven’t made their way fully into the mainstream yet, so it’s clear that top holders around the world pay attention when new opportunities to transact open up.”

Though it was not the first property deal in cryptocurrency but was the largest one. The Seller did not reveal the name of the buyer as well as the cryptocurrency used due to the confidentiality agreement. Not just the Developers like Sapir, but there are other popular developers who are now adopting Cryptocurrency for their transactions and also accepting the currency as rent payment or payments for goods and services. As cryptocurrency is popularizing across the world, it can be rightly said that “Cryptocurrency is the future”.