Marvel and DC prohibts artists from selling their NFTs

When digital artist Beeple sold an NFT for $69 million in March, Marvel and DC issued a severe warning to other artists not to take on Batman or other heroic figures from their comics realm.

According to Coin Telegraph, Marvel and DC’s decision to prohibit artists from developing NFTs is motivated by the firms’ desire to enter the lucrative NFT market while maintaining stringent intellectual property control.

In February, Marvel began selling an NFT of the Spider-Man character for $25,000. 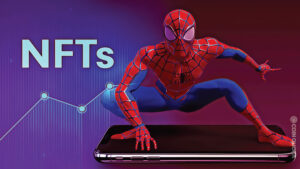 However, the prohibition is a substantial hurdle for artists who sell valuable collectables based on Marvel and DC characters’ derivative work. As it will prevent them from accessing a significant source of money. To lessen the pain, Marvel appears to be open to providing artists with supplementary revenue opportunities through VeVe. it is a digital collectables app.

Visa spent $150,000 on the mohawk-sporting character CryptoPunk #7610 this summer. It demonstrated how popular NFTs have become in the art world.

The State Hermitage Museum in Russia will conduct an online-only research exhibition containing “born-digital” NFT artwork in November. The Binance NFT Marketplace was used by the Saint Petersburg-based museum. The purpose was to purchase five Van Gogh and Leonardo da Vinci masterpieces for $440,500.

NFT sales peaked at $4 billion on the NFT marketplace OpenSea in August. Yet, sales dropped by 50% last week.

Marvel official NFTs will be available by 2022

A couple of months ago, Marvel Entertainment announced a collaboration with Orbis Blockchain Technologies to launch nonfungible tokens (NFTs) and digital collectables on the VeVe marketplace app later this year.

Marvel’s vice president of business development and strategy Daniel Fink said. “We hope to expand the limits of what Marvel fandom can be, starting with personal and interactive digital collectables that, through NFTs, fans can truly collect, share, and enjoy in a way that they haven’t been able to do before.”

All Marvel digital collectables will be minted on the blockchain and available for users to buy and trade using the in-app currency Gems on VeVe’s secondary marketplace (GEM).

The VeVe app already accepts credit card payments for tokens and sells digital collectables. It includes characters from DC Comics, Star Trek, and other brands. Wolverine, Spiderman, Iron Man, and Captain America are some of Marvel’s most well-known characters.

Marvel has been largely absent from the crypto arena. Yet, independent artists can still sell work incorporating well-known characters. On Portion.io, an NFT containing a Spiderman drawing by Adam Kubert sold for more than $25,000 in February. Portion.io is a platform that allows people to produce and auction uncommon art,

In addition, the Marvel Cinematic Universe has incorporated digital assets and characteristics of the crypto world. The third episode of Disney+’s The Falcon and the Winter Soldier series mentioned a $59 million Bitcoin (BTC) bounty.

Since December 2020, the VeVe marketplace has reported selling over 580,000 NFTs. According to Cointelegraph, NFT trade volume in the space might reach $175 million by October. Along with a $470 million market capitalization.