Mastercard to buy Israeli tech firm Dynamic Yield from McDonald’s Fast food giant bought Israeli company in 2019, has been looking to sell part of its tech since early 2021

McDonald’s said Tuesday it’s selling a tech company it acquired roughly three years ago to Mastercard for an undisclosed amount.

The fast-food chain had bought Dynamic Yield, which specializes in personalization and decision logic technology, in 2019, in a bid to personalize its drive-thru experience. The purchase in 2019 was McDonald’s largest company acquisition in 20 years. 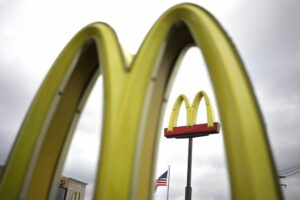 The mega-chain bought Dynamic Yield in 2019 for $300 million and later deployed the company’s technology throughout its drive-thrus and ordering kiosks in the U.S., Australia, and Canada. They offer customers personalized promotions based on their purchase date, time of day, current store traffic, trending products, and other factors.

“The notion of going into a store or opening a webpage to find an experience perfectly tailored to you is no longer farfetched. It’s a reality that more brands are deploying and more consumers expect.

With Dynamic Yield’s expertise and our scale and relationships. we’ll be able to bring the connections between the end consumer and our customers to new heights,” said Raj Seshadri, president of Data and Services at Mastercard, in a statement Tuesday.

McDonald’s had hoped to boost sales using the technology to create drive-through menus. That change is based on the time of day, weather, current restaurant traffic, and trending menu items. They display additional items based on customers’ current selections at ordering kiosks.

The deal is expected to close in the first six months of next year.

McDonald’s shares were up less than 1% Tuesday morning, as Mastercard’s stock rose nearly 2%.

The deal also reflects McDonald’s larger effort to outsource its technology rather than own and operate it within the Golden Arches system.

This spinoff isn’t surprising, as franchisees have complained in the past that Dynamic Yield didn’t deliver the sales boost they expected and that its technology failed to meet expectations. Dynamic Yield was McDonald’s largest acquisition in roughly 20 years.

With the sale to Mastercard, Dynamic Yield’s current chief technology officer, Ori Bauer, will take on the role of CEO, and co-founder. The current CEO Liad Agmon will stay on in an advisory capacity, according to the announcement.

Seshadri said Mastercard was “delighted to continue working with McDonald’s, a longstanding client and proven innovator in this space.”

The terms of the acquisition, expected to close early next year, were not disclosed.