As cryptocurrency prices plunge, the newly elected NYC Mayor takes a pay cut. The New York City mayor isn’t backing out of his plan to take his first three paychecks in Bitcoin and Ethereum, despite the recent crypto slump.

Eric Adams received his first paycheck yesterday, which was converted to Bitcoins and Ethereums via cryptocurrency exchange Coinbase. The decision was made following a Twitter debate between Adams and Miami Mayor Francis Suarez, who stated that his next paycheck would be in Bitcoin. 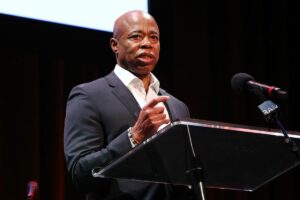 Despite the current crypto bear market, New York City Mayor Eric Adams has decided to collect his first three salaries in Bitcoin and Ethereum. On Friday, Bitcoin plunged below $36,000, a 47 percent drop from its all-time high in November, bringing the total cryptocurrency market capitalization below $2 trillion.

Adams received his first salary, which was converted to Bitcoin and Ethereum via cryptocurrency exchange Coinbase, yesterday. According to the New York Post, the mayor of New York is paid $5,900 monthly, for total annual compensation of $258,750.

Eric Adams didn’t say how much of his $5,900 check is split between Bitcoin and Ethereum, but if the crypto market continues to fall, the monies from Adams’ first check might vanish soon.

Last November, Mayor Adams declared that he would take his first three paychecks in Bitcoin (just as Bitcoin hit a new high of $69,000). The decision was made following a Twitter debate between Adams and Miami Mayor Francis Suarez, who stated that his next paycheck would be in Bitcoin. Adams, on the other hand, wanted to go a step further, preferring to get not one, but three salaries in digital currency as part of his plan to make New York City “the heart of cryptocurrency.”

Mayor Adams is one of a growing number of high-profile figures that accept cryptocurrency as payment. Aaron Rodgers, Tom Brady, and Odell Beckham Jr. are among the NFL players who have elected to convert a portion, if not all, of their earnings to Bitcoin.

However, because all three players transferred over their pay when Bitcoin was at its highest last fall, the current crypto collapse is likely wringing out their digital wallets even more than Adams’.