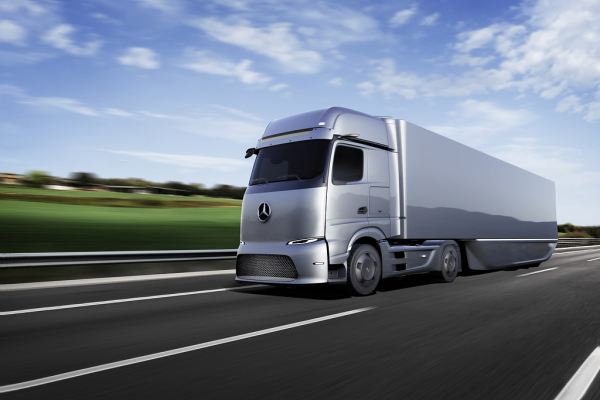 Mercedes-Benz is going ahead with its transformation to electric in truck production as well. The upcoming model will be eActros LongHaul which is scheduled to start series production by 2024. The vehicle is expected to have 500 km (311 miles) with one battery charge.

The eActros LongHaul will be designed to have high-performance megawatt charging. Its first prototype is a 40-ton truck that is undergoing some tests. The trails on public roads are yet to start, as the engineers plan to do it by this year. Meanwhile, the automaker has been working on other variants of the eActros- like the eActros 300 and the eActros 400. The vehicle for municipal use – eEconic is scheduled to roll off by July from the Wörth plant. It will be the second all-electric series production vehicle from Mercedes.  With the electric vehicle push, Mercedes will be contributing toward CO2-neutral new vehicles in Europe. The automaker plans to have carbon-neutral vehicles of more than 50% by 2030.

The manufacturer has also organized an event that will last for many weeks, starting from early June. It is being organized to launch the truth to customers from all over Europe. Wörth site will be hosting the event. Various experts from Mercedes-Benz trucks are expected to come. Around 1,000 participants on the central aspects of e-mobility are expected, from services and infrastructure to electric models. During the event, customers will also get to drive the eActros 300 with realistic payloads and demanding routes.

In depot charging, Mercedes-Benz Trucks is working together with Siemens Smart Infrastructure, ENGIE, and EVBox Group. In terms of public charging for long-distance transport, Daimler Truck, TRATON GROUP, and the Volvo Group have signed a binding agreement to establish a joint venture. This will provide for the development and operation of a public, high-performance charging network for battery-electric heavy-duty long-haul trucks and coaches in Europe. The charging network of these three parties will be available to fleet operators in Europe regardless of brand.

The goal of the High-Performance Charging in Long-Haul Truck Transport (HoLa) project, with the participation of Daimler Truck and under the aegis of the German Association of the Automotive Industry (VDA), is to plan, erect and operate a select high-performance charging infrastructure for battery-electric long-haul truck transport. Two high-performance charging points with the Megawatt Charging System (MCS) are to be erected at each of four locations in Germany and tested in real-world applications. Various other consortium partners from industry and research are involved in the project.