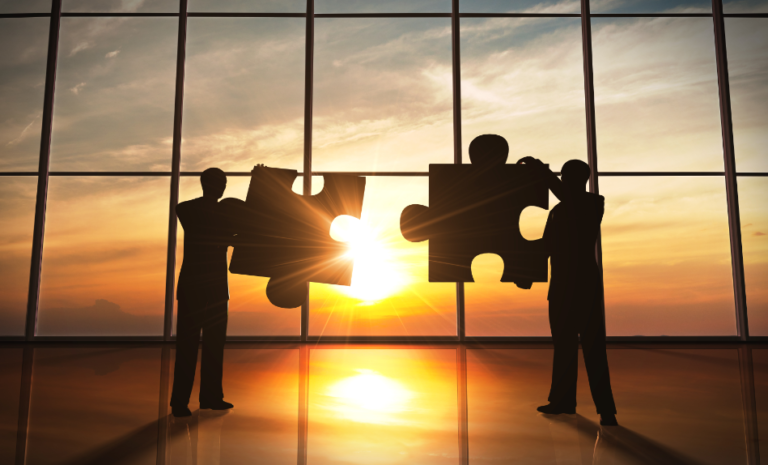 Mergers And Acquisitions 101: Reasons, Challenges And Future of M&A ! 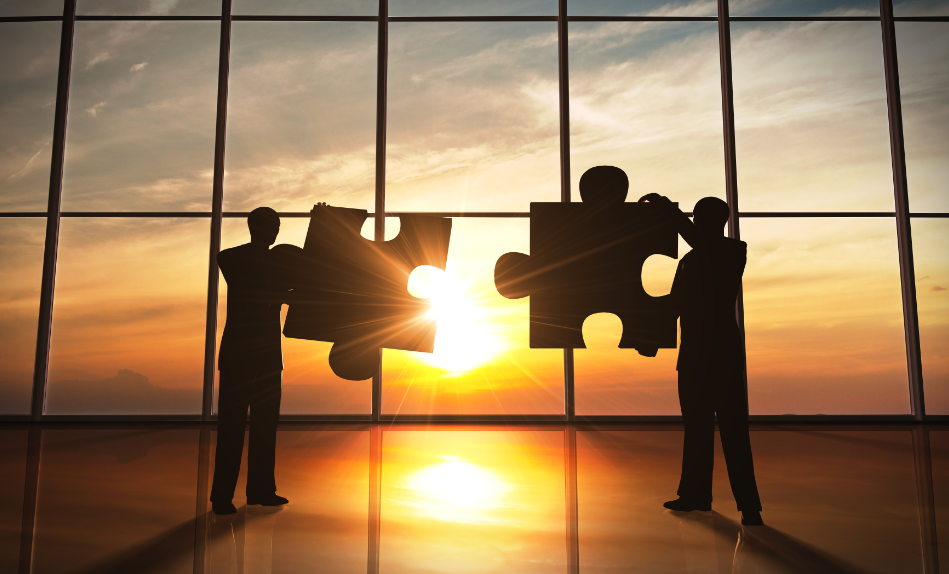 Doesn’t it give goosebumps to the market observers when there is the formation of some union between two superpowers in the same market? Recently, when Flipkart and Myntra merged, they, in turn, emerged to be more powerful and resourceful. So let us go through these fine concepts of clubbing or merging, which are the face turners of any business around the globe. It is a transaction based on the purchasing or clubbing with the mutual consent of a couple of firms. A vibrant example of a merger in India is that of Rajasthan Bank-  ICICI Bank and Renault- Nissan. Essentially, there are three types in which the mergers can be classified upon, as follows

Mergers happening between companies producing similar products, goods and services with the intent of

These type of mergers are basically of two different types:

– Pure Conglomerate: Wherein the companies have nothing in common

– Mixed Conglomerate: Wherein there is an extension of product or market as a whole

The best example of conglomerate merger is that of Pepsico- Pizza Hut.

Qualitative Reasons Leading To Any Merger

Service Enhancement on both the company fronts, which means that the merger happened with the goal of achieving that milestone, which could have been impossible for the firms to achieve, individually

Incrementing collective profit margin so that both the firms earn a bilateral and bigger margin of benefit thereby, leading to their overall development

Risk Division- As it is always very crucial while moving onto a new front on the business waves, it becomes highly supportive for both the firms as the risks are divided and they continue to have a strong backup

Mutual Advantage and combined thrust in the market.

We all have heard about how Facebook purchased Whatsapp and Microsoft purchased Linkedin but there is a defined phenomenon which leads to this purchasing, commonly known as the acquisition. The acquisition is an act of acquiring effective control by one company over assets or management of an another firm directly or with formal consent.

Some of the examples of the same are:

There are two types of Acquisitions:

Enhancement and extension of opportunities by the acquiring company

Intent of dominating the market

To open and flourish itself multidimensionally

Statistics Of Some Of India’s Largest M & A Deals

Interesting Examples of Recent M & A

TCS- CMC: Merger to consolidate IT business under a single entity

Yahoo- Bookpad: Yahoo acquired Bangalore-based startup bookpad for a little under $15 million and turned out to be the first ever acquisition by Yahoo

Acquisition of Cozilla by BuildTraders:  Acquisitions are not limited to the world of big corporates, it also happens with startups, to acquire technology, human resources and business resources

Statistics Responsible For The Mergers

At the time, Adidas had a market capitalization of about $8.4 billion and reported net income of $423 million a year earlier on sales of $8.1 billion

Both companies competed for No. 2 and No. 3 positions following Nike (NKE)

According to 2004 figures by the Sporting Goods Manufacturers Association International, Nike had about 36%, Adidas 8.9% and Reebok 12.2% market share in the athletic-footwear market in the U.S. Adidas was the No. 2 sporting goods manufacturer globally, but it struggled in the U.S. – the world’s biggest athletic-shoe market with half the $33 billion spent globally each year on athletic shoes

Clearly, the chances of competing against Nike were far better together than separately

For a successful merger, the challenge was to integrate Adidas’s German culture of control, engineering, and production and Reebok’s U.S. marketing- driven culture

On January 31, 2006, Adidas closed its acquisition of Reebok International Ltd. The combination provided the new Adidas Group with a footprint of around €9.5 billion ($11.8 billion) in the global athletic footwear, apparel and hardware markets

Adidas was of the view that by combining two of the most respected and well-known brands in the worldwide sporting goods industry, the new Group will benefit from a more competitive worldwide platform, well-defined and complementary brand identities, a wider range of products, and a stronger presence across teams, athletes, events and leagues

As Adidas and Reebok were in the domains, wherein, rather than surviving separately and competing, it was a better choice for both the giants to unite and give a tough competition to their rivals in the market and thereby, increasing and advancing the quality of the products, in turn, creating a more user friendly dimension, productwise. Hence, this merger had all the positive aspects to be formed and essentially, be a global leader, not just individually, but collectively. Owing to all the reasons and statistics mentioned above, this merger promised to have a successful trajectory.

Future Avenues of M & A In India

After the economic reforms that took place in 1991, there were huge challenges in front of Indian industries both nationally as well as internationally. The intense competition compelled the Indian companies to opt for M&A’s which later on became a vital option for them to expand horizontally and vertically. (Source: educba.com)

Indian corporate enterprises started refocusing in the lines of core competence, market share, global competitiveness and consolidation. . One of the major avenues of M&A is merger for the purpose of geographical expansion within India. There are a number of businesses which are leaders in their respective states. Such businesses can never become national unless they come under a common umbrella, and once they do, its a win-win for all. For example, one of the last mile companies associated with Idein Ventures is currently trying to expand its local footprint through acquisitions of local leaders in different geographies.

Acquisitions that take place abroad permit Indian companies to gain access to developed markets across the globe. Investors such as Idein Ventures and several others help in such expansion because returns of such mergers can be huge.

Many times corporations require technologies to manufacture the particular product or a service which is not available in India. In such situations, by acquiring/collaborating companies abroad they get access to the technologies. Acquisitions that take place abroad permit Indian companies to gain access to developed markets across the globe.

Manufacturing need driven M&A  Many times it is not profitable for companies to manufacture products themselves either due to cost constraints or requirement of huge investments. In such a scenario alliance with another company can give them the right to sell and diversify their product range. 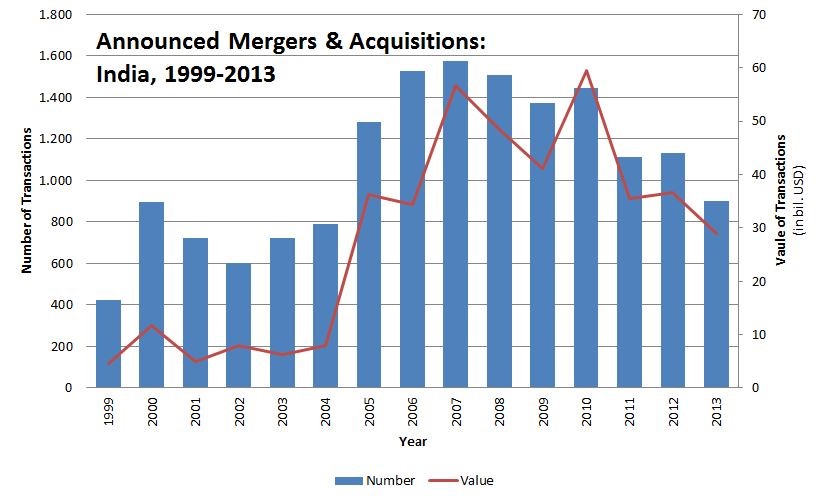 Considering the trends in past years, Year 2012 saw a slowdown in mergers and acquisitions in India

It hit a three-year low down by almost 61% from its preceding year. This was majorly caused by the tough macro-economic climate created due to euro zone crisis and other domestic reasons such as inflation, fiscal deficit, and currency depreciation. However, that year also saw a key trend that emerged and it was the increase in domestic deals compared to cross-border M&As. The domestic agreement value stood at USD 9.7 billion, up by almost 50.9% in comparison with 2011. This shows the local players are waking up to the power of M&A. The trend has continued till 2016 as well.

But the situation seemingly getting better as with a gradual increase in the number of deals, in turn, the trade figures, in the early 2015 and subsequently.

Challenges For The Mergers And Acquisitions In India

With the advent of increasing foreign investors and their involvement, the process rules and the regulations for the M&A are becoming stringent gradually

These changes lead to create an aura of misunderstanding and confusion in the foreign investors and thereby leading to its subsequent effect, which is lesser investment, paving way to destabilization and thereby not being able to set an optimized example of merger, which, as a whole can be quoted as one of the most highlighted reasons for the above descending statistics in the recent years

Owing of these regulatory hurdles, there is a hullabaloo in M&A scenario which again leads to losses on all fronts as it is pictoric in the above graphs and the table.

Conducive Amendments Required For The Proper Flow Of M & A Wave

The Government should make the regulatory procedure more user-friendly and more agile.

And last but surely not the least, the appraisal and promotion of any activity which is in the economic interests of the nation as a whole should always be accepted with wide arms rather than hindering the same, thereby giving the process a negative implication as a whole.

M&As are historically proven to be able to change economies and hence they need to be promoted and supported more, especially on an international front. There are innovative ways to do M & A and interesting avenues for the same, and startups as well as corporates can see and reap the benefits of the same.

Analysis and Info-graphics by Nikit Gadlinge 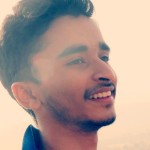 This article was contributed by Arpit Palod an Analyst at Idein Ventures, a global Venture Capital Firm. He has a keen sense of consumer psychology and loves to play with numbers.

An avid reader and writer of tech and finance, he can beat you at Table Tennis any day !