Miami Mayor Francis Suarez wants to make Miami a “Bitcoin City,” where employees are paid in Bitcoin and taxes are paid in Bitcoin. Meanwhile, New York City Mayor Eric Adams announced that he converted his first paycheck into Bitcoin and Ethereum. Senator Ted Cruz of Texas has promoted bitcoin on multiple occasions, touting it as a solution to his state’s power outages.

Bryan Solstin, a software developer, U.S. patent agent, and aerospace propulsion engineer, is one of the newest entrants to the American political arena with a pro-B 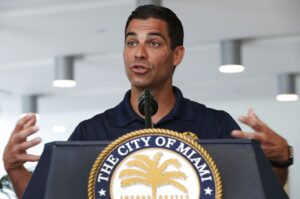 As many sitting senators are pro-Bitcoin, Solstin does more than advocate friendly policies toward Bitcoin. He outlines 22 use-cases for Bitcoin that are more like a wishlist. He wants to follow El Salvador’s example, which made Bitcoin legal tender last year. Motherboard reports that he also wants no capital gains tax on Bitcoin with no maximum limit.

Capital gains taxes accrue wherever Bitcoin is sold, even if it’s for a cup of coffee, so removing taxation rules for smaller transactions has been on advocates’ wish lists for years.

Solstin is a socially-progressive candidate who welcomes LGBT rights and is pro-choice on abortion issues, unlike many other pro-Bitcoin activists on the political right, according to his campaign website.

“Bitcoin, or solid monetary concepts,” he told Motherboard, “are neither Democratic nor Republican. Bitcoin also does not discriminate on the basis of race, color, country origin, sex, or religion.” Bitcoin is profoundly inclusive, unlike political fiat, which is controlled by the powerful”.