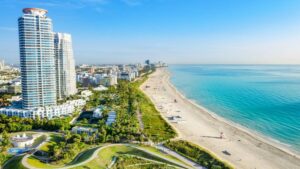 After implying that Miami residents would soon be allowed to pay their taxes using bitcoin, the city’s mayor, Francis Suarez, announced that the process has begun and that his team will submit the request in October.

Separately, Suarez discussed the Chinese government’s recent actions, claiming that the US could profit from this “big error.”

Taxes in Bitcoin to be Paid by Miami Residents?

Francis Suarez held BTC and ETH for some time. He has now become one of the most well-known political figures in the cryptocurrency world in the last year or two. His much more open posture on the business-led in his city hosting the world’s largest Bitcoin conference earlier this year.

Suarez was asked about his prior comment on Anthony Pompliano’s Best Business Show, in which he stated that government and municipal personnel may be paid in bitcoin in addition to Miami residents paying their taxes in bitcoin.

The mayor stated that the process has begun. But that, as with anything with such significant significance, it could take some time. Nonetheless, he feels that governments should be properly educated about BTC. This step should be taken in order to make sure that they are not antagonistic to it. As his team is attempting to do.

“We are preparing to submit a ‘request for proposal’ in October. That is how we have to select vendors. And we will have a vendor who will allow us to pay our staff in bitcoin and accept bitcoin for fees.”

Suarez went on to say that a county commissioner is currently looking for a means for taxes to be paid in BTC as well. As a result, he expressed optimism that these projects will be approved by late October.

“We want to accomplish it using bitcoin since it’s what we’re familiar with and believe in. We believe it is the most verifiable and reliable network available.”

China made a huge blunder.

Suarez joined MicroStrategy’s CEO, Michael Saylor, in claiming that China made a “big mistake” by expelling bitcoin miners from the country. As previously noted, the world’s most populous country has taken a strong line against the mining, trading, and other aspects of the sector.

As a result, the United States will be able to provide more jobs. Which it previously lost to China owing to “slave labour.”

Miami is one of numerous US cities urging miners to migrate there because of the low cost of nuclear electricity.