After a long wait Micromax is finally going to launch their new smartphone lineup in India. It’s been no doubt that we Indians have been whole-heartedly waiting for the brand to make a comeback. And now finally Rahul Sharma has announced that the smartphones are coming. The official launch date has been confirmed and also the processors on the phones have been teased.

Rumoured specs of Micromax IN lineup 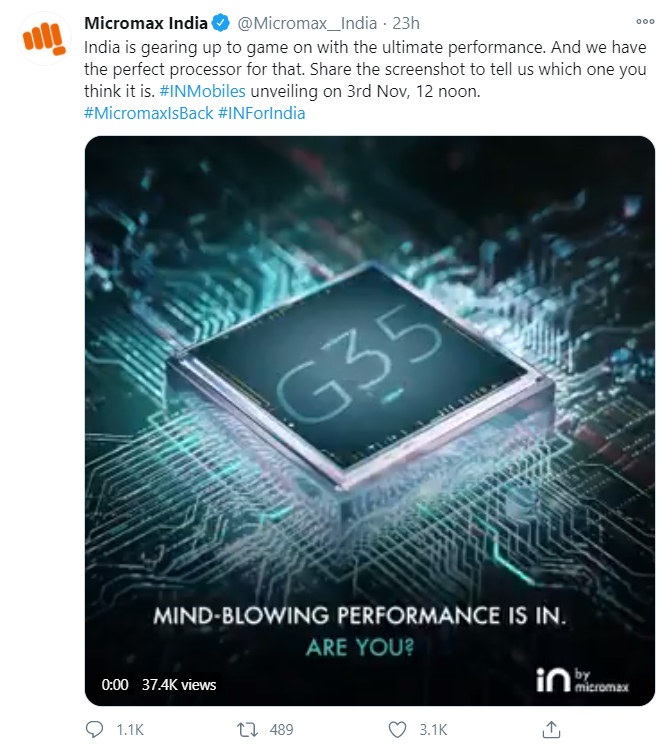 Micromax IN 1 and 1A are coming to India on 3rd November. And their Twitter handle has indirectly confirmed the presence of the MediaTek Helio G35 and G85 chipsets. Reports also suggest that the phones will be priced between Rs 7,000 and Rs 15,000. An article from the 91 Mobiles also provides some of the other specifications of the device.

The Micromax 1a might have a 6.5-inch HD+ display with a 5000 mAh battery and a 2 and 3gb RAM variant. The device might also sport a triple-rear camera in the 3gb variant and a dual-camera setup in the 2gb one. No rumours or official data on the specs of the Micromax IN 1 is out, but 91 Mobiles has confirmed it is the higher model and will have the G85 chipset.

Other important details confirmed by Rahul

Talking about the UI of the device Rahul said, “For us, it will be a very-very clean experience — absolutely near-stock Android experience. No bloatware, no ads, nothing. We’re [also] not going to take your data, we’re not going to do it”. He also confirmed that they are trying to build the smartphone in India. And not sourcing it from somewhere else. Though I am loving that Micromax is making a comeback, but their ways are not that great. Starting with the invite which mentioned “Cheeni Kum” indirectly targeting the Chinese brands and exploring Indian sentiment. Even though Rahul, CEO of Micromax, said in an interview that they are not planning to use the sentiment in their regard. But actually, bring good devices.

Since no official details about the phones except the processors are out, I will keep my judgement of their d3vices, but surely the marketing needs to be worked at. As very wisely pointed out by Beebom that only a brand that provides good devices can sustain in the market. So, exploring sentiments against the Chinese brands won’t work for the long run.

Are you excited about the Micromax IN lineup or do you think it will be another disappointment? Let us know in the comments below. Also, if you found our content informative, do like and share it with your friends.

Also Read: How to delete only media from chats in Whatsapp?