American multinational technology company Microsoft Corporation is finally pulling the plug and has decided to permanently remove Adobe Flash from Windows 10. The operation is being referred to as “Update for Removal of Adobe Flash Player,” and will be made official in July. The updated version of Windows 10, known as 21H1, which is expected to made available in late May, will also remove the software.

The updating process that removes Adobe Flash will also be used for older operating systems, such as  Windows 8.1, Windows Server 2012, and Windows Embedded 8 Standard, with the timeline following this respective order.

Flash had first gained popularity for bringing interactive content to the Web world and taking the quality of animations to new heights. In fact, the Flash Player plug-in was an essential gadget among PC users until the late 1990s and early 2000s. However, over time, it began to criticism for security issues and its performance, which had gradually become obsolete.

Microsoft had already been in the process of removing Flash support from its Microsoft Edge browser, which was coupled with an update that many people will have received and installed automatically. With this new decision, it will be removing the Flash Player that is delivered with Windows. However, if someone uses a version of Adobe Flash Player manually installed from another source, it will not be removed.

While the announcement may be recent, the discussion surrounding it is not. Negotiations have been in the process for years. It had lost the support of several prominent browsers in 2016, and Flash itself had stopped supporting the legacy format at the end of 2020. 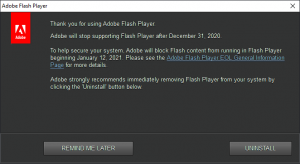 Flash Player will not be receiving any new software versions or even security updates. The loss of Flash Player has already begun to impact prominent game publishers, such as Zynga, which announced that it will be shutting down FarmVille, one of the most played games on Flash. Several Web developers are also spending some time to learn more about HTML5  – which seems to be Flash Player’s replacement – to keep up with the constantly shifting technological landscape.

Adobe is no longer supporting Flash Player and neither are Web browsers, including Google Chrome and Microsoft Edge. However, if users wish, there are various other methods to continue playing the games that could be found on Flash. For example, the Internet Archive now provides backed-up versions of many old Flash games and animations in order to preserve a significant portion of the Internet’s history. Additionally, an open-source project titled Ruffle is also being developed. It will allow users to experience Flash content in a Web browser, without the need to install a plug-in.

If one currently has Flash on their computer, Adobe’s recommendation is to remove it. This can be done by downloading the Flash Player uninstaller offered by Adobe for both 64- and 32-bit versions of the Windows operating systems. There is also a similar variant available for macOS users.