MicroStrategy adds another $177 million in Bitcoin to their holdings

As MicroStrategy adds another $177 million in Bitcoin, their total holdings add up to a total of 108,992 coins. The latest purchase added 3,907 coins to their previously very large portfolio. Time and again, the company has shown that they envision BTC as the future and therefore never falter at purchasing more. The company made many purchases while BTC was going down, and now as it’s recovering, they are accumulating again. Microstrategy is also one of the few companies that started their Bitcoin journey back on August 11, which is almost 1 year back. And since they were early in the game, the company’s entire stash has an average price of just $26,769.

Michale Saylor, the CEO of Microstrategy, is a strong advocate of Bitcoin. He believes that it is the future and is therefore going all in with the company’s investment. Another important thing is that time and again, he has defended Bitcoin’s quirks and explained how they are not problems. He shed light on the energy usage, citing that Bitcoin is mostly running on renewable energy or the part that is already being wasted. 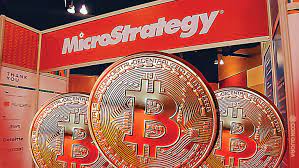 One big question is, what if Bitcoin fails? What will happen to the company? It will probably suffer heavy losses or go bankrupt and have to shut down. The point is Microstrategy is taking a big risk with Bitcoin. If they succeed, this will undoubtedly be a historic moment, but we will know how important diversification is if they fail. Even Peter Schiff says he would like to see Microstrategy go down and Bitcoin fall; only then will he make an entry.

One big question regarding the latest purchase

Anyone who believes in Bitcoin knows that the more you stack, the better. Microstrategy’s latest purchase was made at an average price of $45,294. When I shared this with my friends and my crypto group, people asked why they didn’t purchase when BTC was at $29,000. Well, there are a few possibilities to this. The company might have thought that Bitcoin could go lower, and they planned to purchase more coins then. It could also be possible that they didn’t have the cash reserves to make a purchase at the time (a little unlikely). And finally, the case could be that FOMO pushed them to make the purchase (adding as much as they can before the bull run).

What are your thoughts on the latest Bitcoin purchase of Microstrategy? And is it a good idea how they are going all-in with the purchase? Let us know in the comments below. Also, if you found our content informative, do like and share it with your friends.