Money Paid by Sponsors In IPL 2022

The Indian Premier League is one of the most well-known professional T20 tournaments, with ten clubs competing for the title.

The Board of Control for Cricket in India (BCCI) established the league in 2007, with eight teams competing in the inaugural edition. An auction was held on January 24, 2008, to determine the proprietors of the new league, with the total base costs of the franchises costing roughly $400 million.

The successful bidders were announced at the end of the auction, as well as the locations where the teams will be based: Bangalore, Chennai, Delhi, Hyderabad, Jaipur, Kolkata, Mohali, and Mumbai.

The franchises were eventually sold for a total of $723.59 million. In 2008, the Indian Cricket League was forced to close its doors.

Star India is now paying the BCCI R16,347 crore during a five-year contract (R 54.5 crore per match). The BCCI expects the rights to generate R 30-35,00,000 crore because of the league’s quick rise and consistent viewership ratings.

Since the league’s inception in 2008, the Indian Premier League’s (IPL) stock has risen year after year. The IPL has gone on to become one of the most popular leagues in the world, with the format being adopted by cricket bodies all around the world.

In terms of revenue, sponsorship funding has only increased, with more and more brands becoming associated with the cash-rich league. Today, in front of the IPL 2022 super auction, we look at many elements such as the overall budget of IPL teams, sponsors, franchise revenue, valuation, and more.

Budget for the IPL 2022 auction

Prior to the player retention for the IPL 2022, each of the ten clubs in the IPL 2022 was given a budget of INR 90 crore. The eight incumbent franchises retained a total of 27 players ahead of the IPL 2022 big auction, while the two new clubs – Lucknow Super Giants and Gujarat Titans – signed three players apiece.

With INR 72 crore and two retained players, Punjab Kings hold the largest purse for the auction. Sunrisers Hyderabad have three retainers and a purse of INR 68 crore to spend. After keeping four players, the Mumbai Indians are left with INR 48 crore for the auction.

Tata is an Indian multinational corporation that is one of the country’s oldest and largest industrial conglomerates. Jamshedji Tata founded the company in 1868. Tata is everywhere, from autos to consumer goods; you name it, they have everything.

RuPay is India’s first transnational financial services and payment system. It was established in 2012 by the National Payments Corporation of India. According to the BCCI, RuPay will be an official sponsor of the Indian Premier League in 2022, though the sponsorship will be for a number of years. RuPay, one of the IPL’s official partners, will pay INR 140 crores for the sponsorship.

Dream11 Dream11 is an Indian gaming firm where users may design their own fictional team and earn money based on the performance of the players they have chosen for their squad.

Harsh Jain and Bhavit Sheth launched the company in 2008. Dream11 has signed on as an official partner and has secured the sponsorship rights for the IPL 2022. It is the first Indian gaming company to be recognized as a Unicorn.

Unacademy is one of India’s largest Ed-Tech enterprises, with headquarters in Bangalore. It’s an online learning platform where you may watch educational videos and listen to lectures. In 2020, the Ed-tech corporation became an official partner of IPL; this year, it is also a sponsor of IPL 2022. According to speculations, Unacademy will pay INR 120 to 130 Crores for the sponsorship rights over a three-year period.

Tata Safari is an SUV manufactured by TATA Group’s subsidiary, vehicle maker Tata Motors. TATA Safari becomes an official partner of the IPL in 2021, and this year is no exception; they are sponsoring the IPL.

CRED is an Indian Fintech firm with headquarters in Bangalore, India. Kunal Shah created it in the year 2018. The organization is well-known for rewarding its clients that use CRED to settle their credit card bills. CRED entered into a three-season partnership with IPL in 2020, hence they are also supporting and an official partner of the event this year. According to sources, BCCI has signed an agreement with CRED worth INR 120 crore.

Upstox is an Indian fintech business that offers its consumers intriguing investment possibilities. Upstox Co-founders are Ravi Kumar, Shrini Viswanath, and Kavitha Subramanian 2009, and its headquarters is in Mumbai, India. Upstox will be a sponsor of the IPL in 2021, and it is also an official partner of the event this year. Upstox was also a sponsor for IPL in 2021, it is a multi-year partnership. The agreement is for two seasons at a cost of INR 45 crore per season.

Swiggy is the official ground sponsor of the IPL.

Swiggy is one of India’s most popular meal delivery applications, launched in 2014 by Sriharsha Majety, Nandan Reddy, and Rahul Jaimini. It has worked with a diverse range of eateries across the country to provide its consumers with a diverse selection of cuisines.

Swiggy will now be a part of one of the country’s greatest events, as the BCCI has hired the online food delivery platform as an IPL 2022 sponsor. According to sources, it is a one-year deal, with Swiggy paying INR 35 crores for the sponsorship and becoming the IPL’s on-field sponsor.

Star Sports is an Indian television sports channel owned by Star India, a Walt Disney Company subsidiary. The channel debuted in 1991, and Star Sports is an official partner and sponsor of the IPL 2022, as well as the event’s official broadcaster.

Disney+Hotstar is a Walt Disney Company subsidiary that provides internet streaming services. In 2015, the OTT platform was launched. The streaming service is an official sponsor of the IPL 2022. It is the IPL’s Official Digital Streaming Partner.

Paytm is a global Indian fintech business that offers digital payment system services as well as other financial services. Vijay Shekhar Sharma created the company in 2010, and its headquarters are located in Noida, India. In 2019, Paytm became the official umpire partner of the IPL. It was a 5-year deal, so it will still be on the list of IPL sponsors in 2022. It has agreed to a deal worth INR 326.80 crore.

CEAT is a worldwide tire manufacturing firm based in India that was founded in 1958. CEAT is the Official Strategic Timeout Partner and an official sponsor of IPL 2022.

With a brand worth of 2,500 crores, the four-time champion is one of the most expensive teams in the T20 Cricket League, and many firms have jumped at the chance to sponsor them. 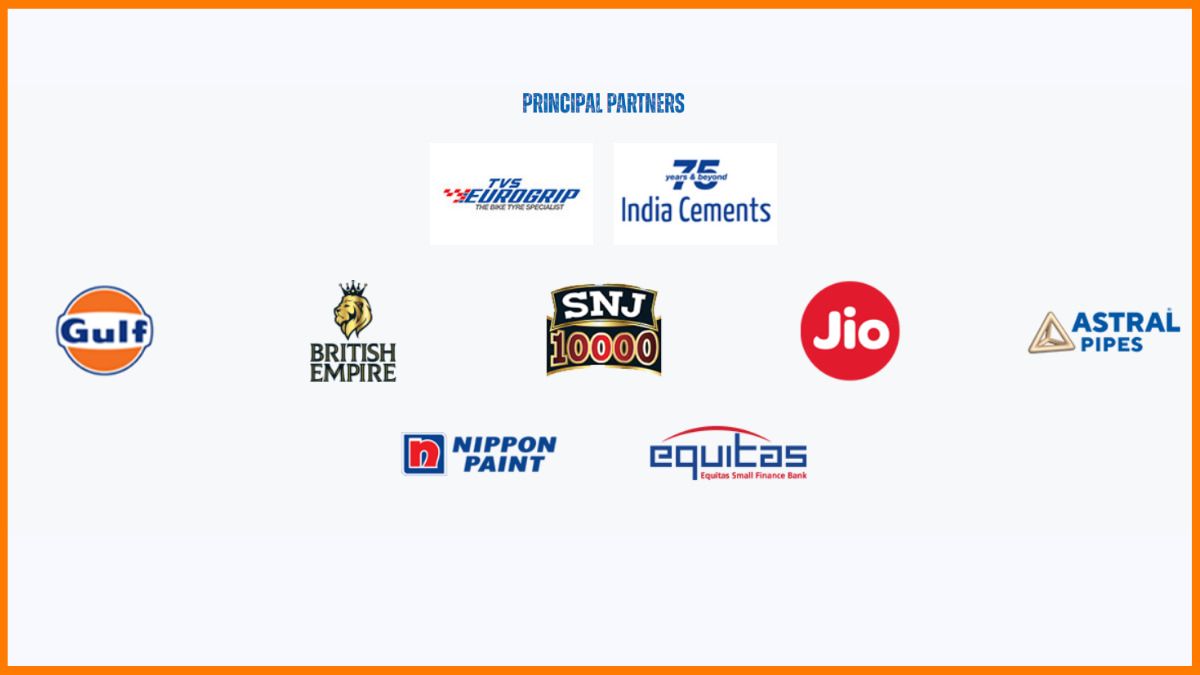 Mumbai Indians are the most successful IPL team, having won five championships and having a brand worth of $2,700 crores. Reliance Industries, one of India’s largest corporations, owns the Mumbai Indians. Mumbai Indians’ sponsors include: 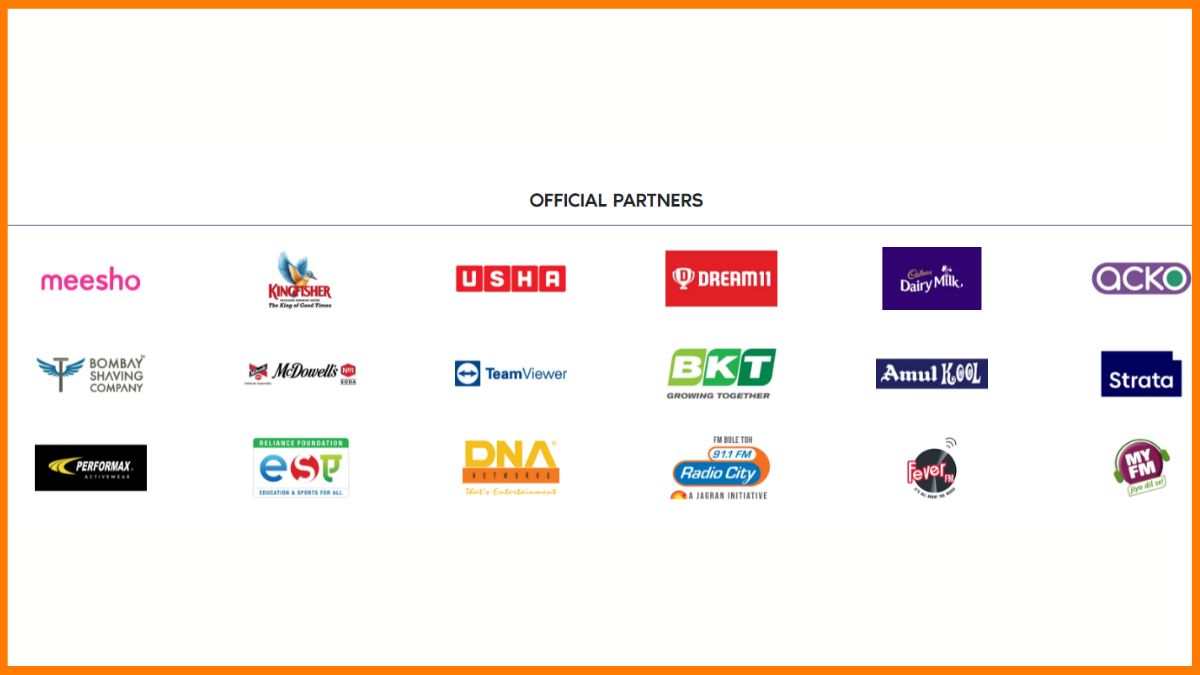 Another popular IPL franchise team is RCB, which has a brand worth of 536 crores. Some of the team’s sponsors include:

Sunrisers Hyderabad, better known as SRH, won the IPL 2016 and its brand worth is 442 crore; it is also a large franchise, and its sponsors include: 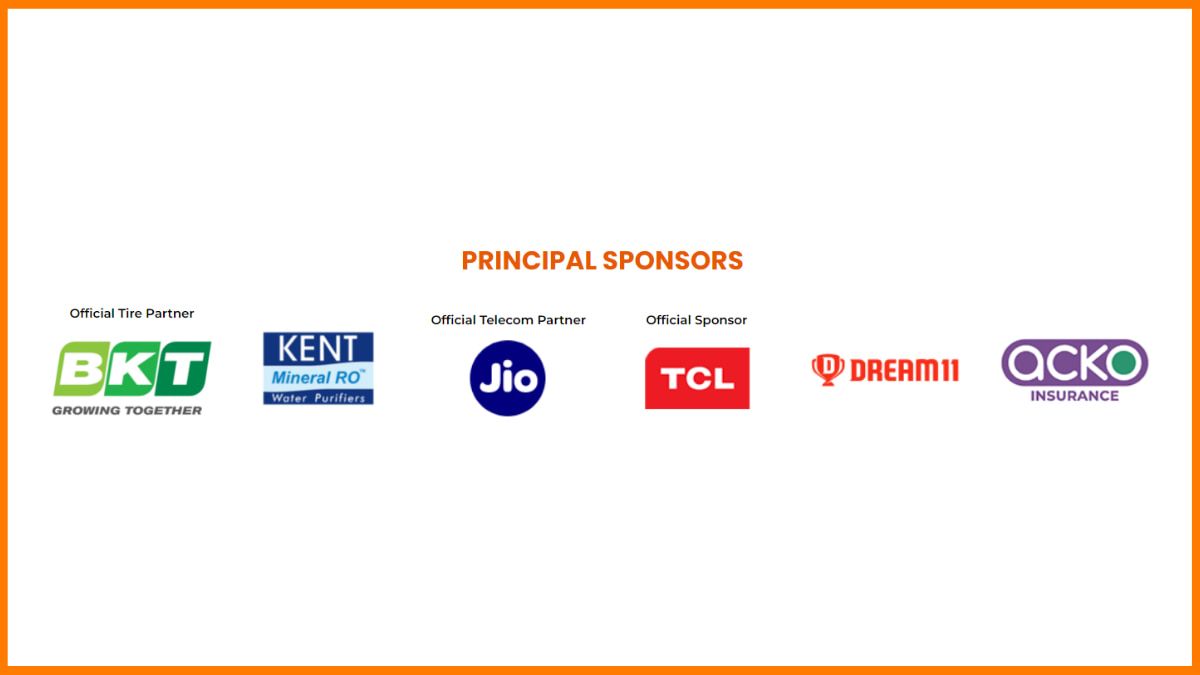 Delhi Capitals, one of the strongest teams in the IPL, is also seen as a dark horse. With a brand value of 370 crores, some of the brand’s sponsors include: 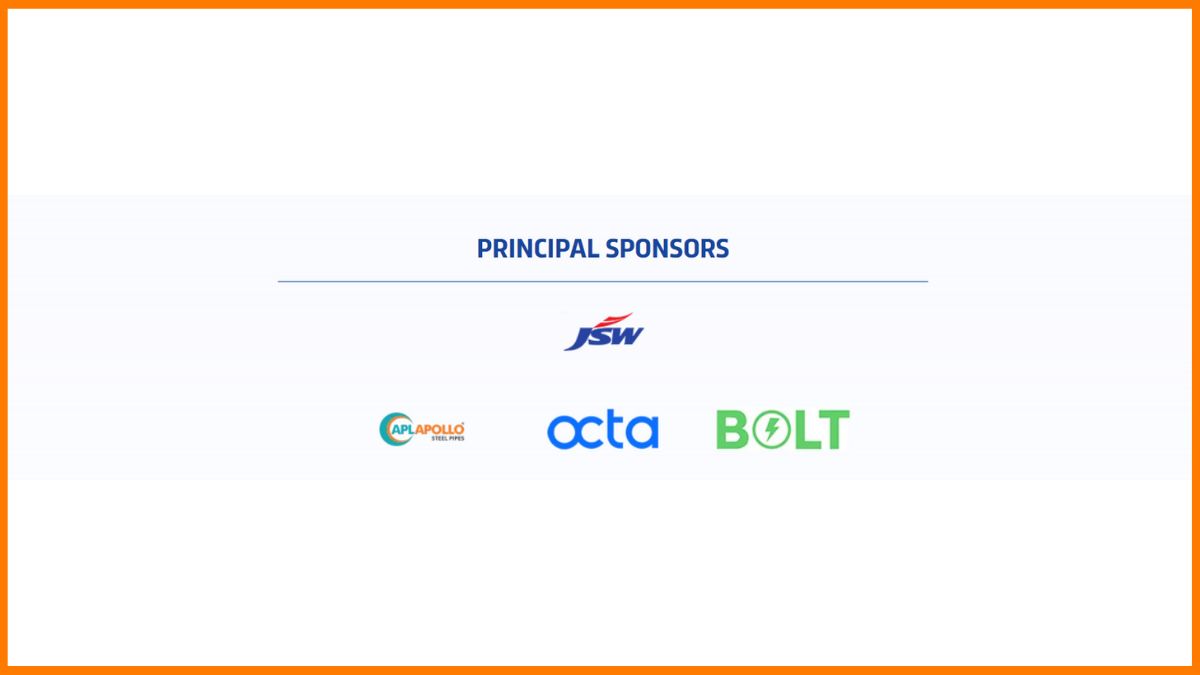 KKR, one of the most popular IPL franchises, has won the title twice. The team’s sponsors, with a brand value of 543 crores, are: 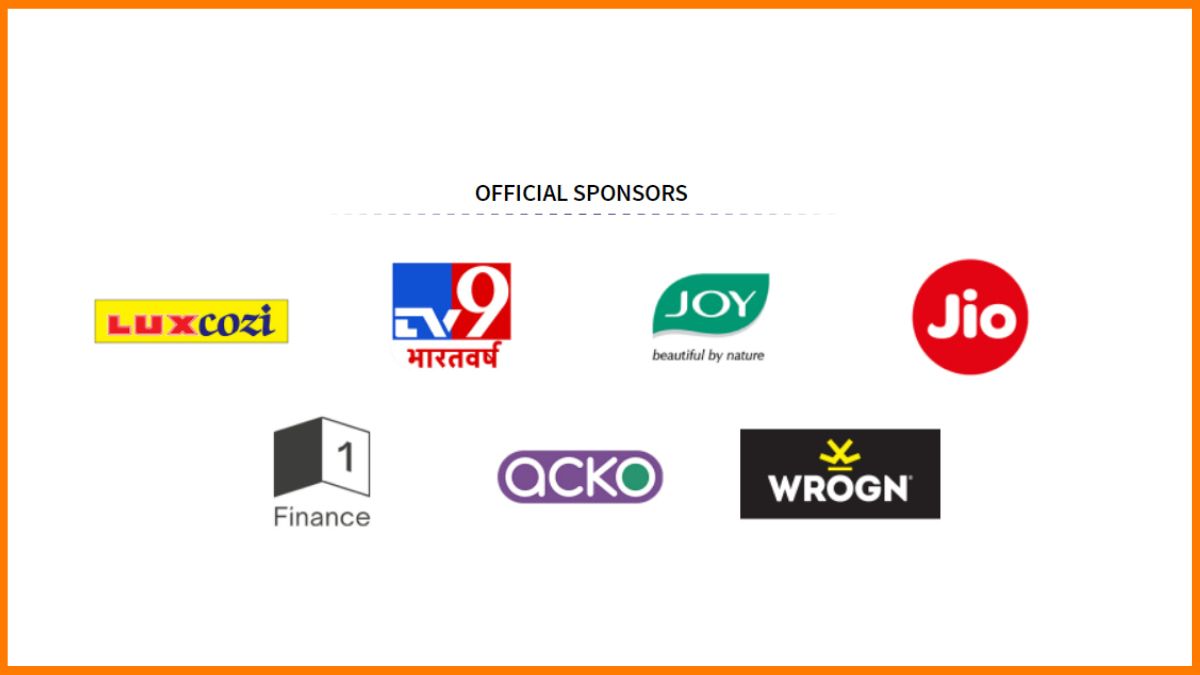 The brand value of Punjab Kings, better known as PBKS, is 318 crores. The following companies have sponsored the franchise: 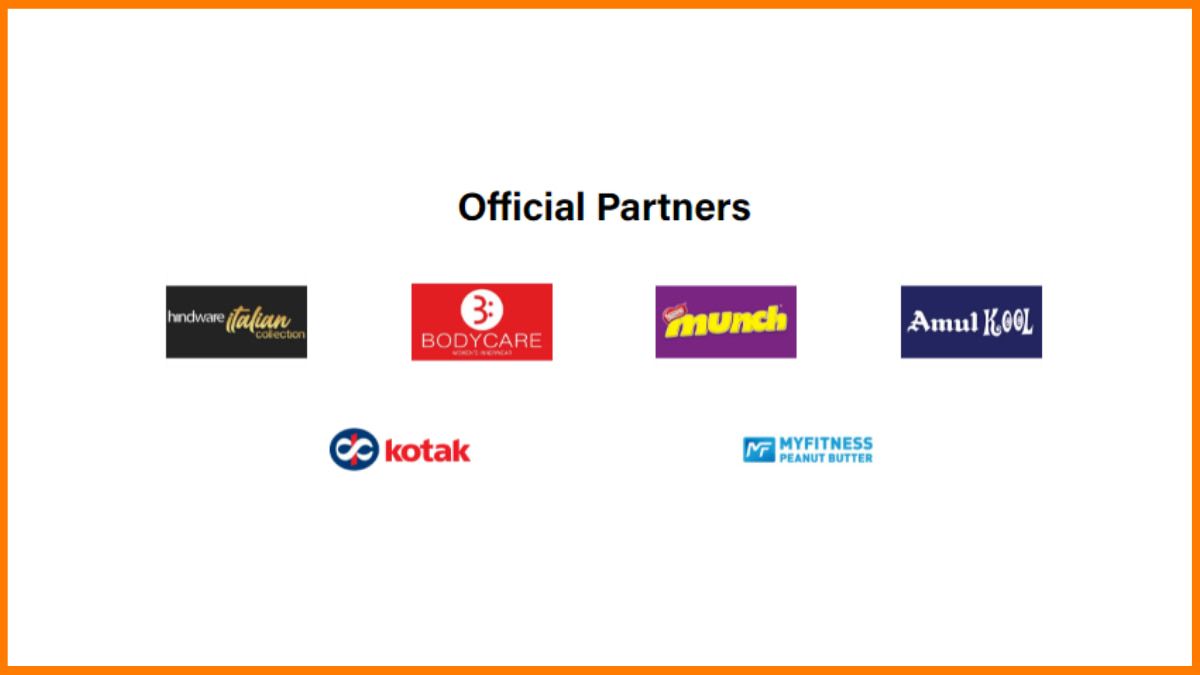 The value of the Rajasthan Royals (RR) brand has now reached 249 crores. The team’s sponsors are: 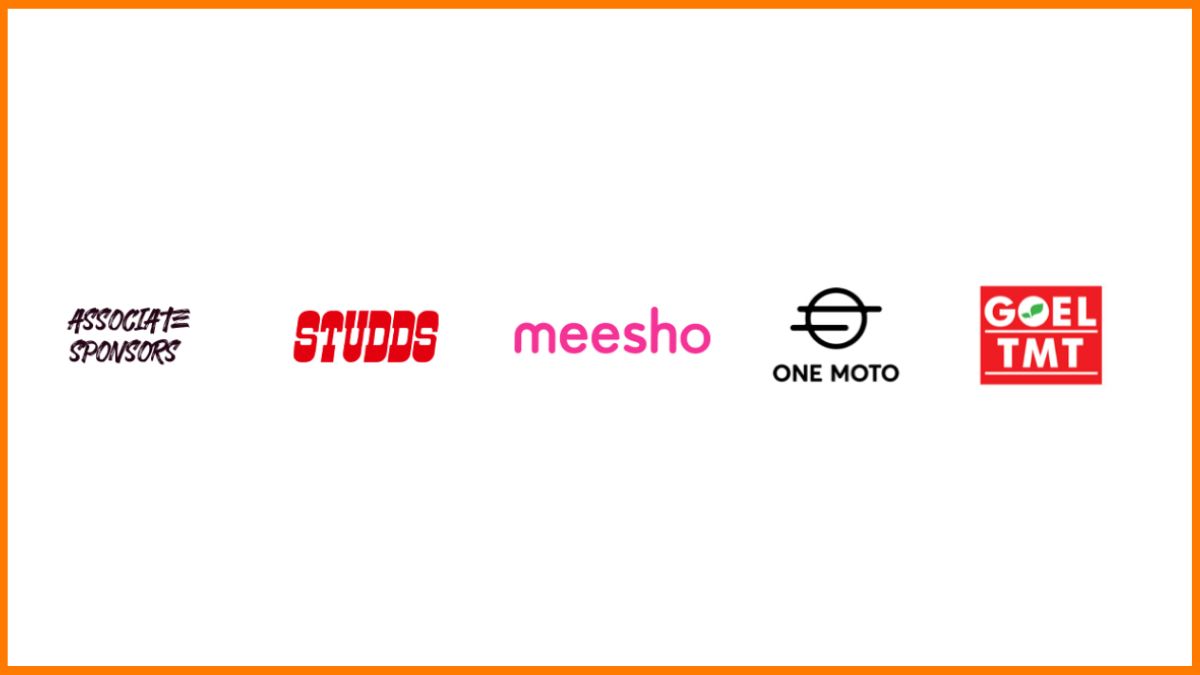 Gujarat Titans are one of the new franchises added to the IPL 2022. This team’s sponsors are: 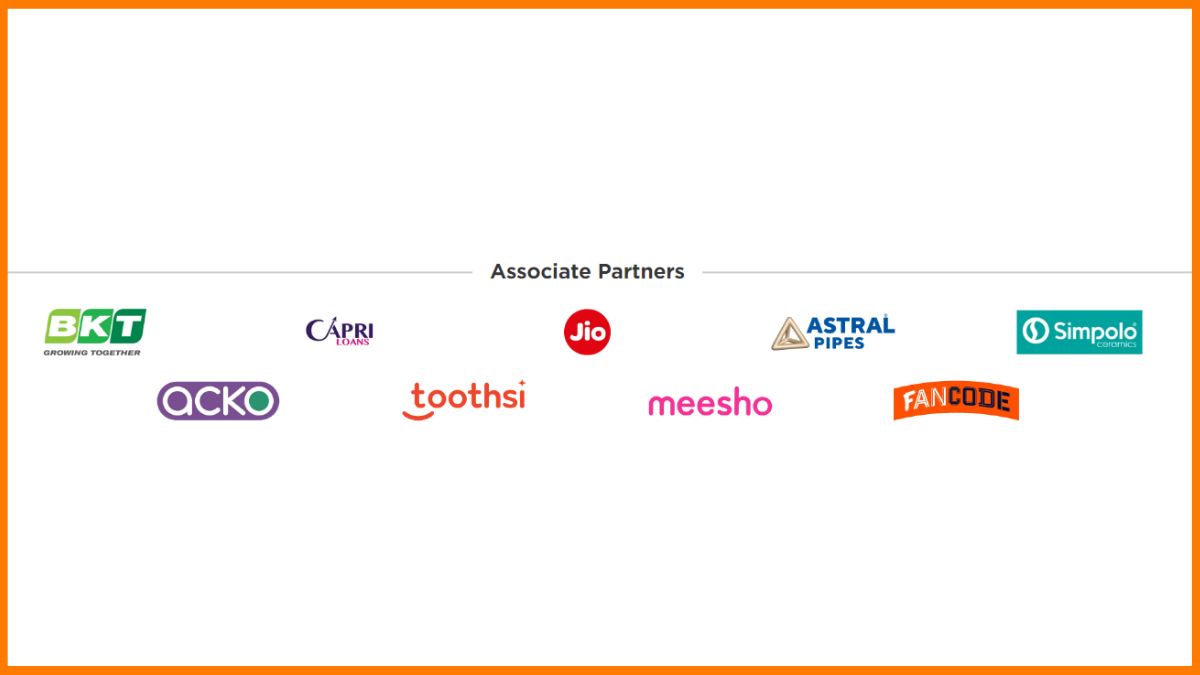 The Lucknow Super Giants are the other new franchise in the IPL 2022, and their sponsors are: 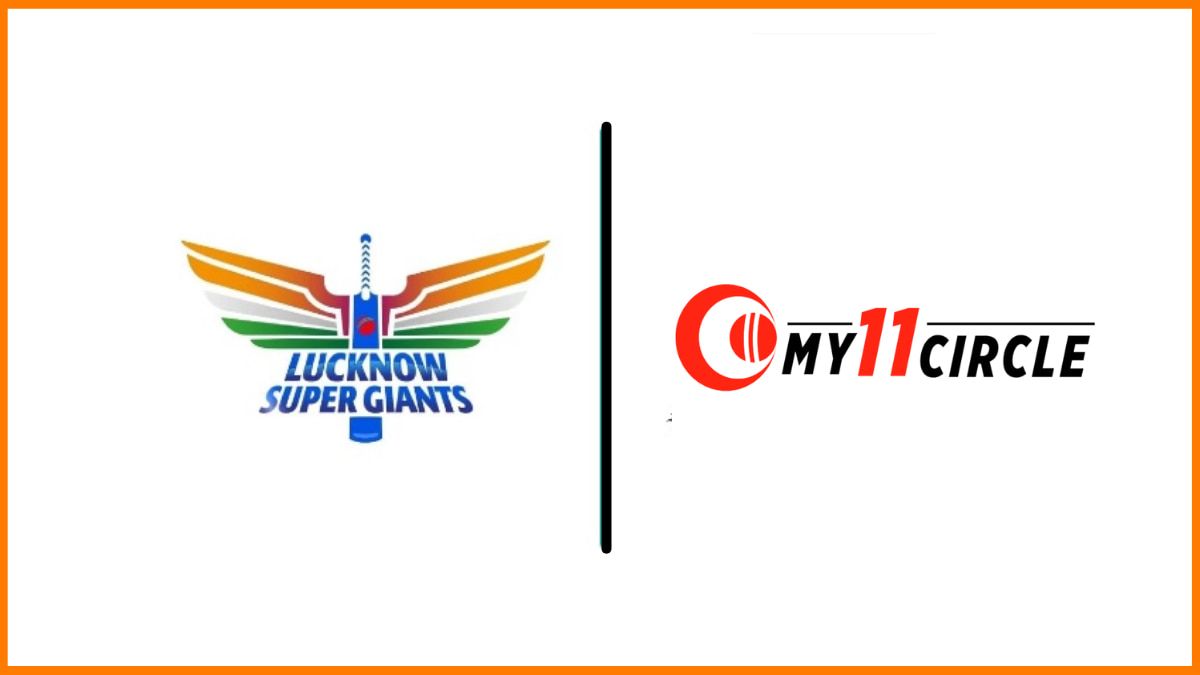 This brings the list of IPL sponsors for 2022 to a close. It would not be incorrect to suggest that IPL has now become a brand in its own way. This T20 competition is one of the most popular cricket leagues in the world, with a viewership of 380 million. As a result, it is natural for well-known brands to want to work with IPL.