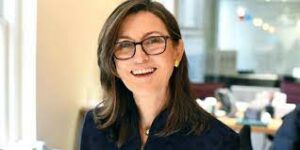 In a note dated 15th July, J.P.Morgan’s strategist, Shawn Quigg cautioned Cathie Wood’s investor, ARK Innovation ETF, that they could demonstrate bubble-like features similar to those observed in Internet-related companies excessively in the late 1990s and that investors could be caught up in a “bull trap”.

According to Quigg, a second-half pace up in Treasury yields and a change in the growth dynamic of the economy could stimulate a bull-trap reversal of shares in the exchange-traded fund.

“A looming rise in yields could be a catalyst to accelerate ARKK shares lower, in addition to the continued outperformance of large staple-tech stocks over disruptive-tech stocks, and pressing ARKK into the capitulation phase,” he wrote

Quigg suggested the investors buy ARKK October $105 puts — the strike price around 11% below Wednesday’s closing level ETF — to use the implied volatility which remains low.

As of Monday, the Treasury’s ten-year yield decreased by 27% as of March to around 1,26%   Together with fear about the economic implications of the COVID-19 delta variant, this led to the return of high-tech growth equities and ARKK value, Quigg stated. Lower bond rates usually mean greater stock prices.

However, the current move in Treasury yields is just technical and does not indicate wider investment anxiety about economic health or declining inflation prospects, he says. 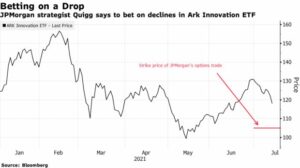 JPMorgan anticipates the outperformance of cyclical and value assets during the post-pandemic recovery and reopening period.

According to Morningstar, Wood’s Flagship ETF became the leading actively managed US ETF in 2020 with growing popularity in high-growth equities such as Tesla, and COVID-19 winners like Zoom. But from mid-February to July it has dropped more than 25%.

Wood’s Ark Investment Management had a stark beginning to 2021, with wins in the areas of electric vehicles, biotech and cryptocurrency and also stock improvements in domestic trade. However, several of these issues failed and the company’s primary ETF declined by more than 35% in mid-February.