MUKESH AMBANI IS READY TO REVIVE THE TOY STORE HAMLEYS

The Indian billionaire Mukesh Ambani is again in the news as it is planning to revive the 260 year old UK toy chain with a lease mechanism. The plans are big and insights into the news can be found from the article below.

PLANS AHEAD IN RESPECT OF REVIVAL

Mukesh Ambani brought the chain in the year 2019 to bring in strength in its retail footprint. This decision was backed by the fact that this toy platform will see a huge growth in the country where one-fifths of the world babies are born.

The toy store Hamleys has unfortunately not been able to make profit in a number of years but it is mood to look up to India where the number of outlets will be increased to 500 in the coming three years. The plans are also to look forward to markets like South Africa & China. 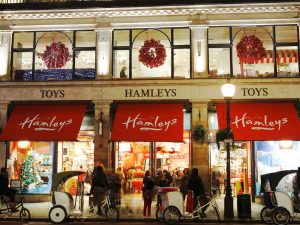 Ambani’s footprint is expected to give new life to the brand. With such a huge backing investor the company is looking forward to cater to the 1.4 billion Indians out of which maximum are kids below the age of 14.

Darshan Mehta; CEO of Ambani’s Reliance Brands stated that “There is a lot of headroom and India is no way near saturation,” We are now mulling how we can roll out stores in newer geographies and new formats.”

Reliance has taken the decision on a very economic basis that is after pandemic people will resort to get happiness for their children at any cost which makes this market more recession proof. This is the reason that the chain now can be expected to get into the United States after expansion in India. They also claim that the chain is on a recovery path after the ownership change.

The company is the oldest & largest toy shop in the world which has close to 5 million visitors every year. It was founded by William Hamley in the year 1760.The store is popular for providing carnival like experiences which can be the major reason why the brand can see a huge growth in the Indian territory.

The Indian retail company acquired it for Rs. 620 crore in a all-cash deal.

India’s population is more demographically suited for toys. It involves emotions and therefore it is the best investment made by Ambani’s up till now. The unparalleled visibility is the key to its success. Mukesh Ambani is definitely known for its strategic decisions and this one shows that any segment can be revived by a market logic that helps you to succeed.