An official said “We’re aware of this activity and have taken steps to secure the compromised account. We are actively investigating the situation. At this time, we are not aware of additional accounts being impacted”. 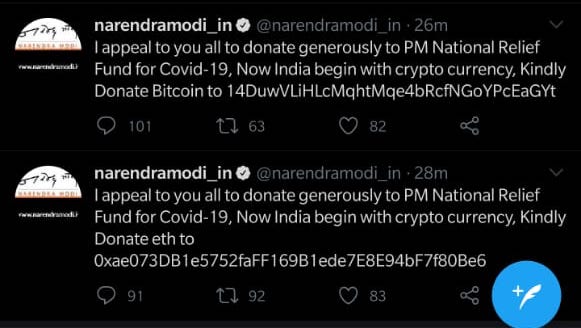 The hacker posted a tweet claiming to be John wick, and this created a series of memes across the internet. Last time when a similar hack happened in July around 130 official accounts were affected. It is difficult to say are these the same hackers who hacked Elon Musk’s and  Barack Obama’s account. The hacker also said that they were not the one who fell Paytm mall.

At a time when even the PM’s account is not secure, it is impossible to have any online safety for regular users. Yesterday, Modi announced the banning of many other Chinese apps, including PUBG, which has a lot of fans in the country. Who knows maybe the hack was a retaliation to that.

What do guys think on the same? I think it might be related to the Chinese banned apps, but you can’t be sure. Post your thoughts on the comments below.