Netflix is building an online hub around its original content

American content platform and production company Netflix, Inc. has announced that it is planning to establish an online hub to highlight the strength of its original content. This is being done primarily due to the increasing degree of competition in the content streaming sector. This was seen on a customer survey on the online magazine Protocol, which suggested that the company is considering the formation of a complementary platform called N-Plus.

According to a spokesperson from the company, N-Plus will be a future online space where Netflix users will be able to learn more about the Netflix shows they keep up with, as well as anything related to them. This suggests that this new hub might include forms of content other than just shows and movies, such as podcasts, how-tos, and playlists generated by Netflix users.

Among these three forms of content, Netflix is currently providing the most hints on how the playlist functionality could work. The survey indicates users could put together lists of their favorite TV shows and movies and share them online. The way that Netflix has discussed the feature suggests that the company could use it to bring new customers to the service. If viewers are not existing members, they will only be able to see a trailer for the show itself. The playlist feature might also include the same support for music. 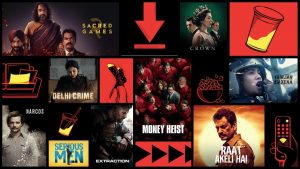 Another part of the survey implies that users of the N-Plus feature could decide the future of Netflix productions. They can learn about a planned show that is in its pre-production stages and influence its development by offering feedback even before filming has finished.

When Protocol initally contacted Netflix about the development N-Plus, a spokesperson for the streaming service stated that the company frequently polls its customers to obtain feedback on ideas that it is working on behind the scenes. Hence, active Netflix users should not read too much into the results of the Protocol survey. It is simply a poll, not a definite confirmation that Netflix will launch an online hub for its originals.

However, one must note that Netflix already uses other online platforms, such as YouTube and Twitter, to promote upcoming shows and movies on its service. Even some of its more niche social media accounts that might be harder to find have an impressive following. Thus, it would not be a major stretch for the company to try and tap into that interest from a different angle.