The Tesla and SpaceX CEO Elon Musk has always been pushing tech discoveries. Neuralink, a start up by Elon Musk focuses on developing implantable wireless brain computer interfaces in order to develop a connection between human brains and computers. the company has now emerged in the spotlight when they posted a video on YouTube of a monkey playing video games just through telepathy.

The 9 year old macaque whose name is ‘Pager’ is shown in the video playing a video game using only its mind. The company Neuralink was co-founded by Elon Musk in 2016. The company aims to develop wireless brain computer interfaces. This would be helpful to cure a lot of conditions relating to neurological functioning such as Alzheimer’s, dementia and spinal cord injuries. The company’s ultimate goal is said to fuse human kind with Artificial Intelligence (AI).

In the video the narrator informs the viewers that the nine year old monkey, Pager, had the Neuralink implanted about six weeks before the video was shot. The monkey was initially taught to play video games with the help of a joystick. It was rewarded with banana smoothie through a metal straw.

While the monkey was playing the game, Neuralink device that was inserted in its brain started recording information. The device was able to learn and predict the hand movements of the monkey based on which regions fired. The device inserted into Pager’s brain was able to predict its moves through machine learning.

Once the device was able to study and learn the patterns, the joystick used by Pager was disconnected from the computer which used to display the game. But the monkey was now able to play the game with its mind and so it continued playing.

In its statement, Neuralink said,  “We are pleased to reveal the Link’s capability to enable a macaque monkey, named Pager, to move a cursor on a computer screen with neural activity using a 1,024 electrode fully-implanted neural recording and data transmission device.”

Elon Musk too tweeted about this invoking a lot of stunned reactions from public worldwide. 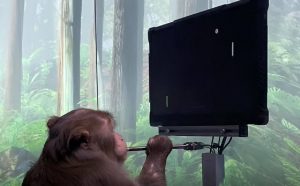 The way this entire process functioned is, Neuralink used its sensor hardware and brain implant to set a baseline of activity as Pager continued to play. The monkey while playing the game has to move a token to different square using a joystick. This data collected was able to help Neuralink device in Pager’s mind to employ machine learning and predict the moves even before Pager would move the joystick.

Once this was accomplished the researchers removed the handle. Surprisingly Pager too was not using its arms to move an imaginary joystick but instead was able to control the game completely with its mind. This was possible due to the Link hardware and neural threads embedded in the device.

According to Neuralink’s press release, the monkey Pager has a 2000 electrode fully implemented neutral recording and data transmission device which is also known as N1 Link implanted into the hand and arm areas of motor cortex. This is part which is responsible for our planning and executing movements.

Elon Musk explains that the ultimate goal of this company is to solve the issue of brain and spinal injuries and help them cope better with the help of a chip which will be implanted.