The field of robotics is a quite challenging one. With its ever changing dynamics and working conditions it is quite an interesting settlement to be involved with. This field is considered to be one of the most important fields when it comes to assisting humans in carrying out dangerous and difficult tasks. Many scientists, researchers and engineers involved in this field put in efforts to give out innovative updates which will further help mankind.

One of the major challenges in this field of robotics and robotics research is the development of effective and resilient control systems. These systems allow the robots to navigate in different environments and make them capable of dealing with any unexpected event taking place.

Now, researchers at the University of Oslo have developed an evolved embodied phase coordination technique for robust quadruped robot locomotion. This study was partly funded by the Research Council of Norway. The details about this work are published in arXiv.

One of the researchers involved in the study, Jorgen Nordmoen said, “The motivating factor for us was the observation that some robot behaviors that we trained in simulation did not function properly when tested on the real robot.”

He also added that, “This observation is a known challenge, often called ‘the reality gap,’ and we wanted to see if using sensor data could help to overcome this challenge.”

This ‘reality gap’ is a phenomenon which is often observed during robotic studies conducted. In order to reduce this phenomenon, Nordmoen and his colleagues came up with an idea to combine the CPGs which stands for Central Pattern Generators along with feedback acquired from the robots body and sensors.

Speaking about the CPGs, Nordmoen said, “CPGs are relatively straightforward to train, however, they do not by themselves incorporate any information about the outside world.”

He further added, “Our main objectives were to see if we could successfully combine a complex CPG network with embodied phase coordination and if the incorporation of sensor data could improve how the robot behaved in the real world.” 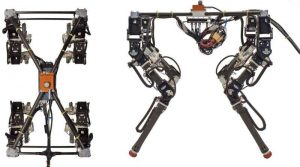 In a general scenario of legged robots, each leg is coordinated with other legs. This allows one leg to always be aware of the relative position of other legs. Compared to this, the embodied phase coordination approach which is developed by Nordmoen and his colleagues allows each leg to be decoupled from the other legs. It is upto the body of the robot to enforce the synchronisation of the legs.

Speaking about the effectiveness of this research Nordmoen said, “Practically speaking, our work could lead to legged robots that are better at adapting to their surroundings, thus handling different environments.”

He further added that, “This includes facilitating the transfer of robot controllers from simulation to the real world. As we wrote in the paper, legged robots have the possibility of aiding on the user’s terms with little in the way of adjustment needed from the user compared to wheeled robots.”

The technique which is developed by Nordmoen and his colleagues can prove to be quite useful when it comes to developing robots with more robust locomotion skills. This study can also be incorporated by other researchers in order to update or develop similar techniques in the future. This approach could prove to be a great starting point for conducting any future research in this field.