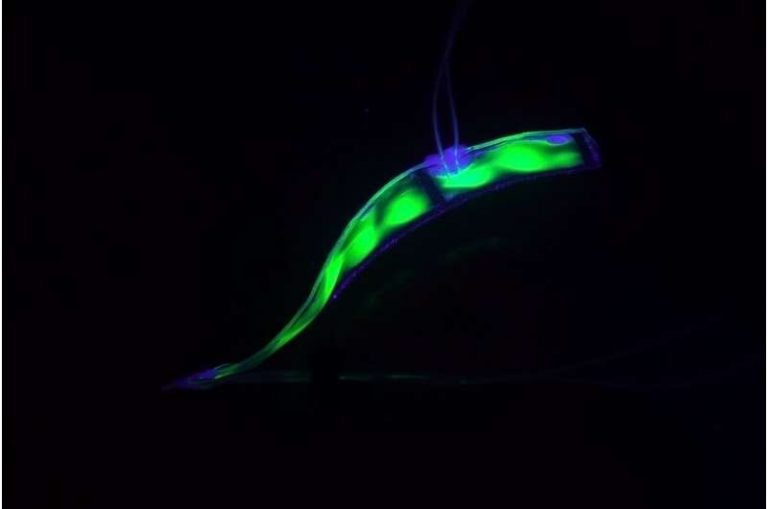 Robotics field has been feeding our curiosity for a long time. Scientists and researchers have built robots which can withstand extreme pressure and can explore places which are not accessible by human beings. This has made it possible for humans to explore many places which were usually hidden from the modern world.

Be it the highest of the mountain or deepest seas, robots have made it possible to access any place, even space. Now, engineers and marine biologists at the University of California have now come up with an innovative Eel like robot which is capable of swimming silently in the salt water without an electric motor.

This robot is equipped with artificial muscles. These muscles are filled with water and the robot uses it to propel itself. The robot is a foot long in size and is transparent. This robot is connected to an electronics board which is kept on the surface.

Caleb Christianson who is a PhD student at the Jacobs School of Engineering at UC San Diego said, “Instead of propellers, our robot uses soft artificial muscles to move like an eel underwater without making any sound.”

This robot could be a big step towards a future where robots can swim alongside life in water without harming or disturbing them. As most of the underwater vehicles which are used to observe and report about marine life are rigid and quite noisy, this soft and silent robot can gel into the surroundings with the other creatures and not disturb their environment.

Michael T. Tolley, who is currently serving as a professor of Mechanical Engineering at the Jacobs School at UC San Diego and is also the corresponding author of the paper, said that, “Our biggest breakthrough was the idea of using the environment as part of our design.”

He future added that, “There will be more steps to creating an efficient, practical, untethered eel robot, but at this point we have proven that it is possible.”

One of the major groundbreaking innovations which went into the making of this soft Eel inspired robot was using the salt water present in which the robot is swimming to help generate the electrical forces that propel it. This robot has cables attached to it, these cables are capable of applying voltage to both salt water which is around the robot and the one that is present inside the artificial muscles of the robot.

Michael T. Tolley said that, “This is in a way the softest robot to be developed for underwater exploration.”

The robot is equipped with conductive chambers inside its artificial muscles. These chambers can be filled with fluorescent dye. In the future, this dye can possibly be used as a kind of signaling system. For the further development, the researchers are planning on adding weights to the robot so that it can dive deeper into the ocean.