The ever changing field of robotics always has something new to offer. Most of the robots are designed by deriving inspiration from nature. A lot of robots share similar features with the fauna that is found in a particular location. That is because those features are developed by undergoing the evolution process and hence are best suited for those surroundings.

Robots are incorporated in a number of industries. They carry out functions ranging from assistance to supervision. Also robots are used to perform duties that are too dangerous for humans and tasks which require machine like precision, something that is unattainable for humans.

Recently, Agility Robotics has launched a new robot called Cassie. Agility Robotics is a branch of Oregon State University. The robot Cassie is bipedal in nature and is capable of walking much more like a human compared to the other quadruped and four wheeled robots available.

This robot can be used for multiple purposes. Since this robot is bipedal, it can scale across diverse types of terrains with much ease. This feature is very vital since it will allow this robot to be utilized for disaster relief and delivering packages straight to the doorstep. Also, it can be a valuable contribution for search and rescue missions. 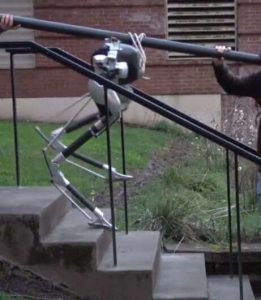 Cassie is capable of travelling under varied difficult conditions such as dirt, grass, a fragile dock surrounded by water and can even stand heavy rains. The details about those robot are mentioned in a paper published by the company for pre distribution platform ‘Arxiv’. It has been accepted for the 2021 RSS Robotics Conference.

The company, Agility Robotics, explained that the robot derives its inspiration from Ostrich due to the bird’s natural agility, durability and efficiency. The researchers wanted to recreate all the above qualities in the robot.

The robot Cassie contains an altered leg configuration which allows smaller motors to be used for enhanced operations. Cassie is equipped with a ‘3 degrees of freedom’ hip, which allows the robot to move in multiple ways including moving backwards and forward, from side to side and rotating both the legs at the same time.

Initial prototypes that were made of this robot are all sold out as of now. However, Agility Robotics have stated that they will be releasing another batch in summer of 2021.

Not only that, the company is aiming to make this robot adaptable for medical prosthetics use. Nowadays we see a lot of computer to human interface on the rise. With it’s built and features a robot like Cassie can prove to be of great help for those humans who are missing a limb or limbs and struggle with locomotion.

Agility Robotics is a fairly new player in the robotics market. Most of its researchers come from the ATRIAS project. The ATRIAS project was one of the first projects that experimented with instilling human like gaits in robots. As of now, the company is aiming to develop the robots which are capable of operating in a more independent manner beyond mere scientific demonstrations.

Although the company is trying to surpass the work done on the ATRIAS project, it is utilizing data from the ATRIAS project such as center of mass motion to mimic human walking patterns and spring mass walking in order to make Cassie the most efficient prototype yet.