Many times science derives its inspiration from nature. Perhaps because nature poses answers to many things that science is trying to understand and recreate. The Robotics field has some robots being made that show clear resemblance to animals that are found in particular regions where the robots need to function. This is because certain features developed by the animals in such regions help them survive better and the robots are trying to achieve a similar task.

Engineers at the UNSW Sydney have now developed a soft fabric robot gripper that is capable of behaving like an elephant trunk and is able to grasp, release and pick up objects without breaking them.

Dr Thanh Nho Do is the senior author of this study who is currently serving as Scientia Lecturer and Director at the UNSW Medical Robotics Lab. The details about this study are published in Advanced Materials Technologies.

While explaining about this soft fabric robotic gripper Dr Thanh Nho Do said, “Our new soft fabric gripper is thin, flat, lightweight and can grip and retrieve various objects—even from confined hollow spaces—for example, a pen inside a tube.”

While adding further they said, “This device also has an enhanced real-time force sensor which is 15 times more sensitive than conventional designs and detects the grip strength required to prevent damage to objects it’s handling. There is also a thermally-activated mechanism that can change the gripper body from flexible to stiff and vice versa, enabling it to grasp and hold objects of various shapes and weights—up to 220 times heavier than the gripper’s mass.”

Trung Thien Hoang is this study’s lead author and also a PhD candidate. The team also consists of Phuoc Thien Phan, Mai Thanh Thai and Scientia Professor Nigel Lovell who is also the Head of the Graduate School of Biomedical Engineering.

According to the researchers, this technology can be utilized in sectors where fragile objects are handled, for example agriculture, food and resource exploration industries including scientific. This technology can also be useful for rescue operations and also can be used on personal assistive devices. 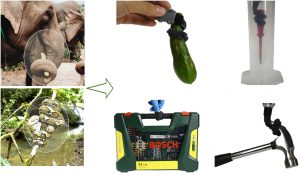 Speaking about how the researchers found their inspiration from nature, Dr Thanh Nho Do said, “Animals such as an elephant, python or octopus use the soft, continuum structures of their bodies to coil their grip around objects while increasing contact and stability—it’s easy for them to explore, grasp and manipulate objects.”

They added that, “These animals can do this because of a combination of highly sensitive organs, sense of touch and the strength of thousands of muscles without rigid bone—for example, an elephant’s trunk has up to 40,000 muscles. So, we wanted to mimic these gripping capabilities—holding and manipulating objects are essential motor skills for many robots.”

When tested, a prototype of the gripper which was weighing 8.2 grams was able to lift an object weighing 1.8 kilograms which is more than 220 times of the mass of the gripper. The prototype was 13 centimetres long in size and was able to wrap around objects with 30 mm diameter.

While the field of robotics has always been giving newer and better solutions, pairing up with nature always opens up doors to new possibilities. With that being said, nature and robot collaboration will provide us with much better solutions and ideas for the future.