Artificial Intelligence (AI) has been a boon in so many ways. It has helped to provide solutions to so many problems. With the help of AI machines can be taught to replicate human intelligence and can learn by itself with the help of data fed and by past experiences.

Robots are being used in many industries nowadays. They are capable of carrying out many tasks which humans can’t. These two technologies are incredible by themselves, but when they are combined with each other we get to see some never seen before innovations.

Xinyan Deng who is currently serving as an Associate Professor of Mechanical Engineering at Purdue University said that, “The robot can essentially create a map without seeing its surroundings. This could be helpful in a situation when the robot might be searching for victims in a dark place—and it means one less sensor to add when we do give the robot the ability to see.” 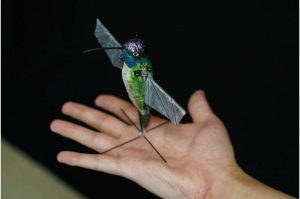 This robot is equipped with flapping wings that are flexible in nature. With the help of artificial intelligence along with its flexible wings the robot is capable of teaching itself new tricks. This robot is not able to see yet but is capable of sensing by touching surfaces. Once the robot learns from the simulation, it is capable of knowing how to move around like a hummingbird, on its own.

Xinyan Deng said that, “The physics is simply different; the aerodynamics is inherently unsteady, with high angles of attack and high lift. This makes it possible for smaller, flying animals to exist, and also possible for us to scale down flapping wing robots.”

For many years, researchers have been trying to decode the flying patterns of the hummingbird. This would then allow them to develop robots that are capable of flying to the areas where larger aircrafts can’t. If this technology was made possible for a drone, they would be able to scale through collapsed buildings and other types of clutter in order to detect trapped victims.

The robot hummingbird consists of a 3 D printed body. Its wings are made out of carbon fiber and laser cut membranes. The researchers were able to successfully build one hummingbird robot weighing just 12 grams which is the same amount an average adult Magnificent Hummingbird weights.

They have also built a robot which is the size of an insect weighing just one gram. The robot hummingbird developed by the researchers is capable of carrying up to 27 grams which is more than its weight.

Xinyan Deng said, “An actual hummingbird has multiple groups of muscles to do power and steering strokes, but a robot should be as light as possible, so that you have maximum performance on minimal weight.”