Most of the elements of technology which are developed so far, somewhere derive its inspiration from nature. It might be to incorporate certain natural qualities into a machine such as thinking and understanding or a number of features developed by living creatures over a period of time through evolution.

Nature and Science both never fail to amaze humanity. Nature too sometimes is healed with the help of science which are backed up by conscious efforts of enthusiasts. With that being said, most of the high tech mechanisms do imitate nature and try and understand the circumstances under which it needs to be used.

A good example of this could be the Moroccan flic-flac spider. This spider has a unique ability which allows it to take the shape of a ball and rook always to a safe environment when faced with danger. According to Yale researchers, this quality can prove to be very useful for robots too. 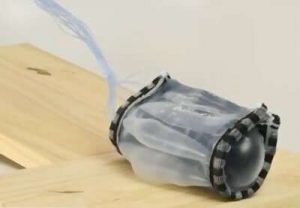 John J. Lee who is currently serving as the Assistant Professor of Mechanical Engineering & Materials Science and the Laboratory of Rebecca Kramer-Bottiglio has developed a unique robot which changes its shape in order to adapt to different environments.

Dylan Shah, who is the lead author of the study and also a PhD student at Kramer-Bottiglio’s lab said, “The final robot design was driven by a combination of what we observed in the simulations and what we knew could be achieved in reality.” He also adds that, “With the software, you can make crazy shape-changing robots with dozens of independent moving parts, but in previous studies, we had trouble making these idealized robots move in ways that matched the simulations.”

The results of this study are published in ‘Nature Machine Intelligence’. Kramer-Bottiglio soft robots are their specialty which is why they are considered to be an ideal candidate for carrying out this study of making the shape changing robots.

The shape changing robots had the advantage over their regular counterparts in certain environments, this was the observation made. When out upon any kind of flat or slightly inclined terrain the shape shifting robot would ball up its inner bladders and then would proceed to roll over to its destination. But when it comes to journey uphill, they would fail to keep up, often rolling back down.

Prior to building any physical robots, the team used computer simulations in order to look up for appropriate shape and behaviour which goes well in each environment and then they found the best ways for the robot to transform between shapes.

Once the physical robots were ready, they were then tested against the computer simulation they were based on. This was done in order to see what exactly could be achieved in a real world scenario. The researchers while testing the robots would often simplify their designs and would then try and see various ways through which the robots were able to change shape.

The researchers are currently looking at how to include smart materials in these robots to increase the robots flexibility and dexterity qualities.