The world of robotics introduces us to new discoveries every other day. It never fails to amaze me how far humanity and technology can go hand in hand. Robots have proved to be quite handy when it comes to carrying out difficult operations. With their involvement, companies can now provide better safety at the workplace and also higher efficiency.

The researchers at Stanford University have now developed a new unique soft robot. This soft robot is capable of moving even while changing its shape.

Nathan Usevitch who is a graduate student in mechanical engineering at Stanford University describes this robot as, “The casual description of this robot that I give to people is Baymax from the movie Big Hero 6 mixed with Transformers. In other words, a soft, human-safe robot mixed with robots that can dramatically change their shape.”

This entire development is published in a paper in ‘Science Robotics’ on March 18. This soft robot is capable of changing its shape and grabbing and handling objects as well as roll around in controllable directions.

The researchers have developed the simplest version of this robot, which they call it as the ‘Isoperimetric Robot’. The reason this name is chosen because even if the shape of this robot changes dramatically, the amount of air present inside and the total length of the edges remains the same.

Sean Follmer who is currently serving as an assistant professor of mechanical engineering and is also the Co senior author of the paper says that, “We’re basically manipulating a soft structure with traditional motors.“

He further adds that, “It makes for a really interesting class of robots that combines many of the benefits of soft robots with all of the knowledge we have about more classic robots.” 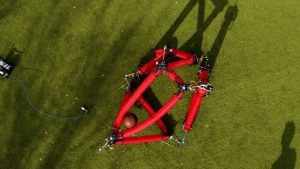 To elevate the form of robot from simple to complex, the researchers simply attached several triangles together. They made the robot perform different behaviours just by coordinating the movements of different motors. The researchers can make the robot carry out different tasks such as picking up a ball by engulfing it on three sides or make it roll by altering the robot’s center of mass.

Elliott Hawkes who is the co-senior author of the paper and also an assistant professor of mechanical engineering at the University of California said that, “A key understanding we developed was that to create motion with a large, soft pneumatic robot, you don’t actually need to pump air in and out.”

He further added, “You can use the air you already have and just move it around with these simple motors; this method is more efficient and lets our robot move much more quickly.”

The entire sector of soft robots is still relatively new and developing. One cannot help but appreciate the tremendous amount of work being done in this field. It will surely be interesting to see what this field has to offer in the coming years.