A lot of innovations that we see and use today are inspired by the ideas posed in popular culture. Many of the well known innovations have been inspired by cartoons or sci-fi movies. Popular culture often showcases flashy machines that are capable of popping out any item at demand.

With the introduction of 3D printers, it is now possible to create a number of items such as jewelry, product models, toys etc. Despite all such advances in technology, it is still not possible to recreate more complex devices that are ready to go right out of the printer.

To address this issue a group of researchers from MIT’s Computer Science and Artificial Intelligence Laboratory (CSAIL) have come up with a new system named ‘LaserFactory’. LaserFactory is capable of printing functional, custom made devices as well as robots without any human intervention.

LaserFactory system is made out of two parts, a software toolkit that enables design of any custom devices and a hardware platform that is used to fabricate them. The system makes use of a three ingredient recipe. It allows the user to create structural geometry, print traces and assemble electronic components such as sensors and actuators.

Martin Nisser who is a PhD student at CSAIL and the lead author on a paper about LaserFactory said, “Making fabrication inexpensive, fast, and accessible to a layman remains a challenge.”

They also added that, “By leveraging widely available manufacturing platforms like 3-D printers and laser cutters, LaserFactory is the first system that integrates these capabilities and automates the full pipeline for making functional devices in one system.”

According to Martin Nisser this one stop shop technology can prove to be beneficial for product developers, educators, researchers and makers who are in need of rapidly prototype things such as wearables, robots and printed electronics. 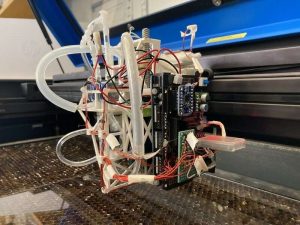 The LaserFactory works in a similar way as that of a chef. It automatically cuts the geometry, picks and places the components, dispenses silver for circuit traces and cures it in order to make the traces conductive while also securing the components in place to carry out complete fabrication.

For its further developments, the researchers are aiming to increase the quality and the resolution of the circuit traces that will be able to incorporate denser and more complex electronics.

The team is also planning on fine tuning the current system and building upon this technology through exploring how to make a fuller range of 3D geometries by possibly integrating traditional 3D printing into the process.

The LaserFactory is incorporated with commands into a single fabrication file. This makes it possible to use the device on the go and is facilitated by the standard laser cutter software. On its hardware side, the device is equipped with an add on that is capable of printing circuit traces and assembles components.

Martin Nisser said, “Beyond engineering, we’re also thinking about how this kind of one-stop shop for fabrication devices could be optimally integrated into today’s existing supply chains for manufacturing, and what challenges we may need to solve to allow for that to happen.”

While adding further they said that, “In the future, people shouldn’t be expected to have an engineering degree to build robots, any more than they should have a computer science degree to install software.”