Odell Beckham Jr, a wide receiver with the Los Angeles Rams, will get his new pay entirely in Bitcoin. In his one-year contract with the Rams, the receiver may earn up to $4.5 million in BTC. The player was released by the Cleveland Browns earlier this month. 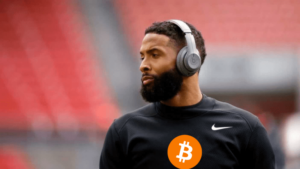 Odell Beckham Jr’s one-year contract with the Los Angeles Rams will be paid entirely in cryptocurrency, specifically Bitcoin. After a couple of disappointing seasons in Cleveland, the gifted wide receiver was released and is now a Ram on one of the league’s top clubs. OBJ will be part of a stacked offensive line that includes Matthew Stafford, Cooper Kupp, and Robert Woods.

It’s a NEW ERA & to kick that off I’m hyped to announce that I’m taking my new salary in bitcoin thanks to @CashApp. To ALL MY FANS out there, no matter where u r: THANK YOU! I’m giving back a total of $1M in BTC rn too. Drop your $cashtag w. #OBJBTC & follow @CashApp NOW pic.twitter.com/ds1IgZ1zup

Meanwhile, the Rams’ defense isn’t bad either, with Von Miller, Jalen Ramsey, and, of course, Aaron Donald on the roster. Under Sean McVay’s cautious supervision, they have a decent chance of winning a Super Bowl in the near future.

Beckham Jr’s fallout with the Browns and subsequent relocation to LA has been well-publicized, but rather than signing him to a multi-million-dollar contract (where he’ll most likely be paid fortnightly or monthly), the Los Angeles Rams have decided to pay his 2021-22 contract in Bitcoin.

“It’s a NEW ERA & to kick that off I’m hyped to announce that I’m taking my new salary in Bitcoin thanks to @CashApp,” Beckham wrote. “To all my fans out there, no matter where u r: Thank you! I’m giving back a total of $1M in BTC [right now] too. Drop your $cashtag w #OBJBTC & follow @CashApp NOW.”

As the value of Bitcoin rises, more athletes and high-profile figures are turning to it as a means of payment. Most notably, fellow NFL player Aaron Rodgers has partnered with Cash App, albeit it’s assumed that only a percentage of his Green Bay Packers pay will be paid in Bitcoin, not the entire amount.

Athletes and teams from all across the world are taking advantage of the expected increased awareness of Bitcoin and the great purchasing power it can give. Sean Culkin and Saquon Barkley, in addition to Beckham and Rodgers, followed Russel Okung’s lead last year. Tom Brady, the legendary quarterback, expressed interest in being paid in Bitcoin in September 2021.