Ubisoft is no stranger to game leaks that come in all shapes and sizes. However, just like us, it might not have foreseen the shocking surprise Nintendo had in store for them. The new game ‘Mario+Rabbids’ that was supposed to be a surprise came out at a surprisingly early time almost six hours before the event in which it was to be revealed. Except for a trailer, everything else including three screenshots and details concerning the game was doing its round on the internet way before its time. What makes it all the more interesting is that the game, supposedly a teaming up of Nintendo and Ubisoft, ended up with the former taking an early step, supposedly by accident, outing it way before the Ubisoft Forward. 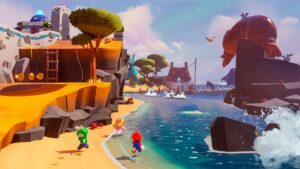 And not so surprisingly, the game doing early rounds caught the attention of netizens, and responses and reactions have been pouring in ever since.

Here are a few reactions and responses from Twitter.

The absolute bliss of shocking surprises.

Two nickels are not too bad after all.

if i had a nickel for every time a mario + rabbids game got leaked right before its initial reveal, i’d have 2 nickels, which isn’t a lot but its weird that it happened twice right pic.twitter.com/AjdOpD09FO

Nintendo leaked Mario + Rabbids Sparks of Hope cause they just wanted to stick true to the original also being leaked Lol pic.twitter.com/1ucmT3fjNm

Leaked or not, the excitement is always on point.

Damn Nintendo. I love waking up at the best times.

A better explanation will be hard to come by.

Left or right, there is only one topic.

ok, the fact that BOTH mario + rabbids games leaked ahead of E3 is hilarious.

4 years ago, it was a ubisoft employee. this time, a nintendo intern fucked up. 🥴 pic.twitter.com/VoO9vD4uSw

Nintendo when no one’s leaked anything from their E3

As long as the coolness factor is in tact, nothing else matters.

This looks super cool though!! pic.twitter.com/1njdNZwhZ8

Hope nobody gets fired. After all, it is part of the game.

SOMEONE IS GETTING BIG FIRED TODAY 💀💀!