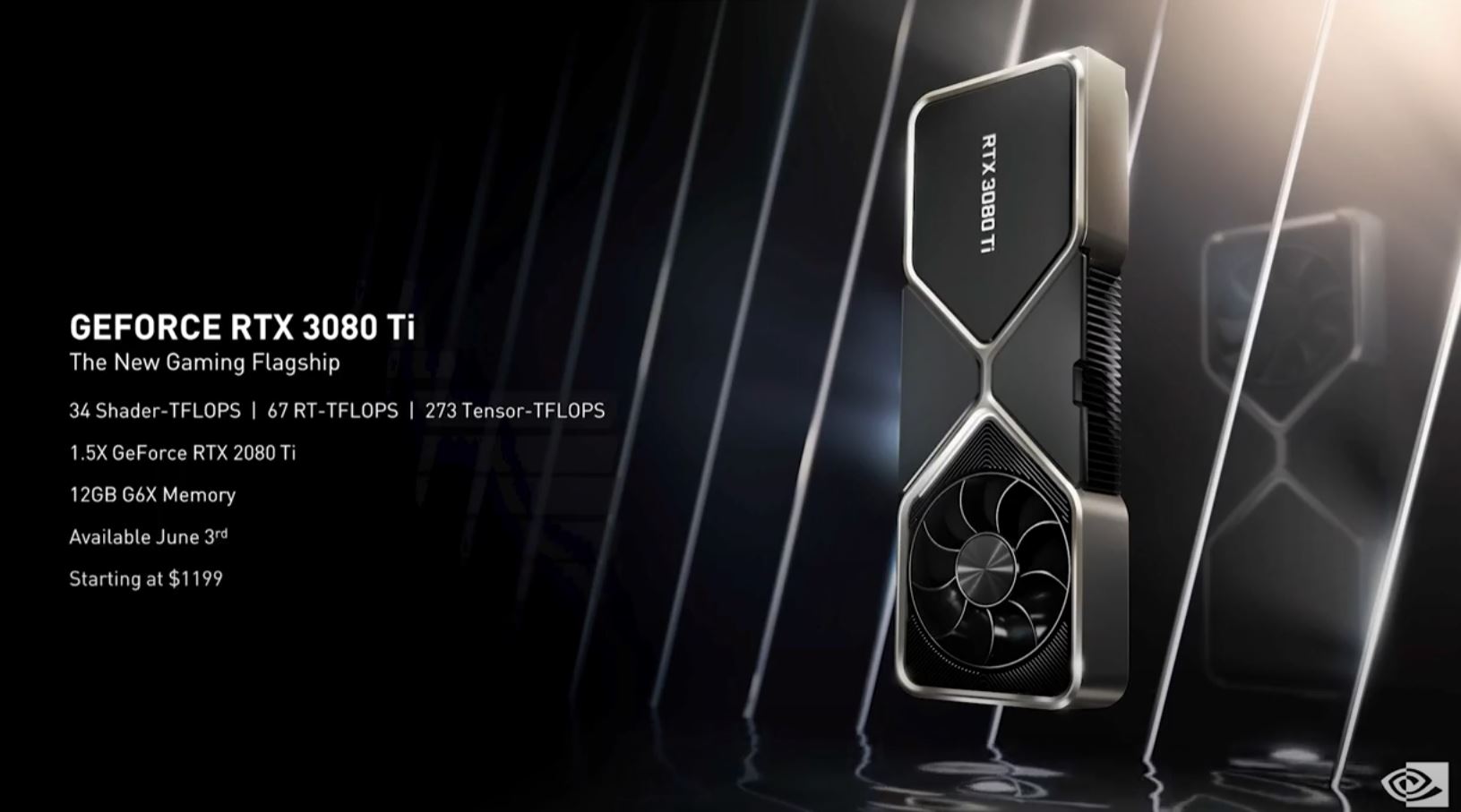 Nvidia is one of the world’s most popular gaming processor companies that recently announced its latest flagship GPU chip today, the RTX 3080 Ti at COMPUTEX executive keynote.

The flagship GPU processor is based on the company’s latest Ampere architecture that promises to be 1.5 times more powerful in terms of performance. According to the reports, the RTX 3080 Ti will officially be available worldwide on June 3rd and is priced at USD 1,199.

The RTX 3080 Ti is the next iteration of the previous generation RTX 3080 and both of them feature identical design and ports. As mentioned on the company website, the main difference between the two flagship processors is the VRAM. The latest RTX 3080 Ti is equipped with a total of 12GB GDDR6X VRAM which exceeds its predecessor. Anyhow, speaking of specs, the latest processor is a true flagship GPU on paper, meaning that this is the closest that the 3080 series gets to the RTX 3090, with half the VRAM, according to a report by The Verge.

Nvidia’s RTX 3090 GPU is the massive game-changer and the latest flagship RTX 3080 Ti costs USD 300 less for half the VRAM which more or less gives similar performances, at least on paper. The first generation RTX 3080 is no competition to the RTX 3090 and even the newly launched RTX 3080 Ti is much better in terms of performance.

However, there are doubts popping up on the internet concerning the design of the RTX 3080 Ti. As mentioned before, the design of the newly announced GPU is similar to its predecessor, the RTX 3080 with extra VRAM, hence, users are concerned about the heating issues with the latest flagship but we can only hope for the best as of now. Potential buyers will have to wait until the review units go live, only then will we find out about any heating issues. The RTX 3090 is massive because of its extra fans and this is what keeps the powerful processor cool during its showtime. Not to mention, the RTX 3090 has double the VRAM than the latest flagship RTX 3080 Ti.

Our #COMPUTEX executive keynote is live. Don't miss the latest in #AI and the power of accelerated computing from gaming to the enterprise. Watch now. https://t.co/AiCEDg2qut

As mentioned in a report by The Verge, Nvidia will be launching another GPU on June 10 and it will be the next iteration of the RTX 2070 Super, called the Nvidia RTX 3070 Ti. Nvidia is speculated to price this new GPU processor at USD 599.

Well, both GPU units will officially be available from this month and the actual prices may differ from what the speculations suggest. Although, Nvidia warns the market that the global chip shortage may cause supply issues with these latest GPUs- RTX 3080 Ti and RTX 3070 Ti.