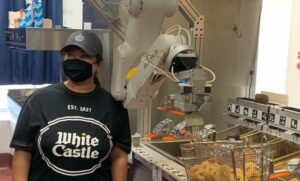 A robot may soon be seen flipping burgers at a White Castle kitchen.
Source: Happy Mag

Food chains in the United States of America are now expanding themselves to robots. Midwestern food chain, White Castle which specialises in American fast food, is planning to outsource its jobs to robots. They are targeting robots called “Flippy 2,” a creation of Miso Robotics.

The Ohio-based hamburger chain had previously been trying out a robotic version of a fry cook since September 2020. This was when the original version, “Flippy” was officially installed in a restaurant in the Chicago area. Soon after, they upgraded to the “Flippy 2” at the original testing location, last year in November. This was when White Castle took the decision to initiate a wider version of the said plan.

Miso Robotics, who created the “Flippy 2,” believe that if these robots take charge of a whole fry station, it will eradicate some of the difficulties faced by these chains. They said that the functions of these robots would “alleviate the pain points that come with back-of-house roles at quick-service restaurants to create a working environment for its human coworkers that maximises the efficiency of the kitchen.”

In a statement last week, Miso Robotics said how this improved the form of its workflow. This would enable for the team members’s deployment, and help them focus on making memorable experiences for the customers.

How the plan will be carried out:

Miso Robotics specified that the distribution of the robotic machines is being done rather systematically. They are planning to phase it out according to the regions and continue doing so in consecutive stages. As White Castle has just ordered for 100 robots for 100 stations, Miso aims to work adequately enough for the chain’s requirements.

Out of 350 White Castle restaurants, they have planned for the robotics program to function in nearly just 33% of its locations. They are spread across the New York area, the Midwest and the Southwest. Out of these, only 100 of these restaurants are getting robotic equipments.

White Castle is not first fast-food chain to adopt the use of Artificial Intelligence to improve its efficiency. The system of drive-thru orders has been an upcoming system in the US in the past few years. Fast-food chains such as McDonald’s, Taco Bell and Sonic are still in works with AI Companies to strategise their drive-thru ordering.

Among the latest news, robots are the new addition to the 2022 Beijing Winter Olympics. They are said to be preparing and serving meals to the reporters covering the event. Restaurants in Texas and Massachusetts hired robots recently as an addition to their staff.