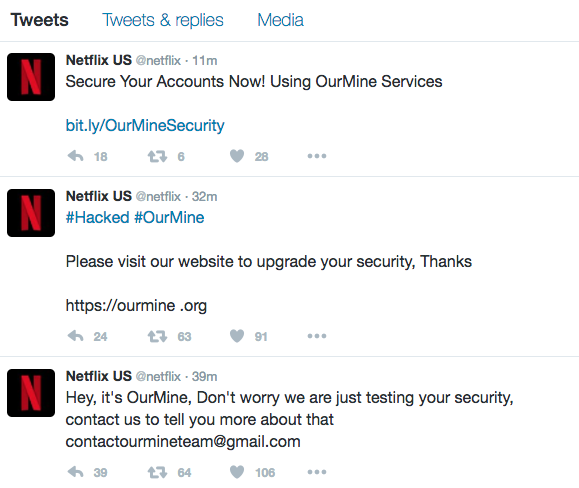 OurMine has done it yet again! This time it was Netflix, OurMine hacked Netflix’s official Twitter account. As usual the group didn’t threaten to do anything, just promoted themselves and showcased account vulnerability.

As per TechCrunch report, The Netflix customer service Twitter account has been fielding tweets over the last hour, informing users that “We’re aware of the situation and are working to get it resolved as quickly as possible.”

When Mic asked OurMine in an email, why Netflix? They responded, “Because their security is too bad.”

Recently, India witnessed several hacks- Rahul Gandhi, Indian National Congress, Vijay Mallya and more- but the methods weren’t the same. Hackers call themselves as Legion and the motive is to reveal the private information to public. They have used abusive, disgraceful language and have warned corrupt public figures- you might be next!