Overall Market Movement for Last Week Stocks shook off a down session Monday and are ending the shortened Christmas week with a solid gain.

After a period of turbulence, the decks may be cleared for a good old-fashioned Santa Claus rally in the week ahead.

The S&P 500 notched a record-high close on Thursday, with oil prices also rising, as investors and traders were optimistic about positive economic data and discounted the impact of the Omicron coronavirus variant on the economy, even as COVID-19 case counts soar. 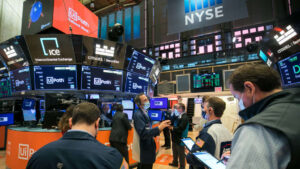 “I think all the things we’ve been concerned about for the month of December to a certain extent, are in the rearview mirror,” said Art Hogan, chief market strategist at National Securities. “We know what the [Federal Reserve] is going to do.

We know while this new variant spreads faster, it’s not as dangerous, and we know Build Back Better legislation is now 2022′s business… I think the market can find a path of least resistance to the upside as we wrap things up.”

Add to that the fact that when the market has had a strong year. The momentum historically has carried into the final trading sessions. In that regard, the S&P 500 is up about 25% for the year.

According to Bank of America, when the S&P 500 has already seen such solid gains, the final six sessions are positive. Since 1980, there have been 10 instances where the S&P 500 was up 20% or more going into the last stretch of trading, and in nine of those years, it ended the final six days higher.

Vaccine makers AstraZeneca Plc (AZN.L) and Novavax Inc (NVAX.O) said their shots were protected against Omicron as UK data suggested it may cause proportionally fewer hospital cases than the Delta variant, though public health experts warned the battle against COVID-19 was far from over.

Tesla Inc (TSLA.O) shares rose, gaining sharply for a second day after Chief Executive Elon Musk said on Wednesday he was “almost done” with his stock sales after selling over $15 billion worth since early November.

While strong earnings can still bolster the case for stocks, S&P 500 company profits are expected to grow by 8.3% next year, after a nearly 50% rebound in 2021.

“Next week is generally a snoozer, the week before New Year’s,” he said. “All the action’s going to come in the first week in January.”

Scientists are racing to answer questions about the virulence and severity of Omicron to help governments respond to the variant, which is spreading at breakneck speed.

However, they added that the reductions in hospitalization must be balanced against the larger risk of infection with Omicron Due to the reduction in the protection provided by both vaccination and natural infection.

Britain reported more than 100,000 new cases of COVID-19 on Wednesday for the first time since widespread testing was available.

They said their estimates from the research suggested that people who had received at least two vaccine doses remained substantially protected against hospitalization, even if protection against infection has been largely lost against the Omicron variant.

Oil prices bounced in a light-volume session on Thursday on signs that the worst effects of the Omicron variant might be more containable than previously feared Even as countries imposed travel restrictions on surging infection levels.

The oil market has wavered in recent days over how seriously to take the threat of another slump in fuel demand. The Omicron variant is more transmissible than previous coronavirus variants. But early data suggests it causes a milder level of illness.

With the Fed forecasting three interest rate hikes for next year. That economic data of all sorts is front and center for the markets.

The housing market has been a huge beneficiary of the near-zero rate policy. So all data on housing will be closely watched. On Tuesday, home prices data will be released. Pending home sales are to be reported Wednesday.

Cal-Maine Foods (NASDAQ: CALM) will post its quarterly earnings results after the market closes on Tuesday, December 28th. Analysts expect Cal-Maine Foods to post earnings of $0.28 per share for the quarter.

FuelCell Energy Inc. FCEL is slated to release fourth-quarter fiscal 2021 results on Dec 29. In the last reported quarter, the company delivered an earnings surprise of 20%.

Its fiscal fourth-quarter earnings are expected to have gained from the increasing adoption of the fuel cell technology and proper execution of projects.

The Zacks Consensus Estimate for the top and bottom lines is pegged at $20.34 million. A loss of 2 cents per share, respectively. The top-and bottom-line estimates indicate year-over-year growth of 19.7% and 75%, respectively.