Blizzard Entertainment and IBM have joined forces for the development of a new data-driven system that will facilitate the ranking of best Overwatch players around the globe. Thanks to IBM, crowning an Overwatch MVP is more of science than art now. 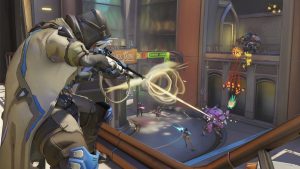 The new technique will be of remarkable help in analyzing the performance of competitors in the esports championship Overwatch League. This will help in the creation of an objective ranking that includes the most skilled and talented players.

As per the IBM blog post, upwards of 360 performance metrics will be used as a base for the Overwatch Power Rankings.

The correlation between particular in-game actions and eventual match outcome will be determined using the data post aggregation, organization, and analysis.

For the determination of statistics that reflects the quality of the players most effectively, machine learning techniques have been applied to existing datasets by IBM. The available metrics will substantially contribute to the final rankings, however, a group of approximately 30 will have a larger and stronger impact on the positioning.

For those who aren’t familiar with the term, Overwatch is a first-person shooter in which two teams are pitted against one another across a number of game modes like capture the point and protect the payload. Six different characters or heroes constitute the teams. Each character has a loadout, moveset, and style unique to them.

Ranking players based on their performance has been a challenging task till now due to the fast-paced and chaotic nature of the game, in addition to the disparities between the heroes.

With the new system, the analysis would be taken a notch up, making it more precise and accurate. This will add to the knowledge base of esports pundits who use the wealth of knowledge to provide context to the viewers.

In the words of Jon Spector, VP of Overwatch Esports,

“We have got really talented analysts that follow our players and teams, but there is so much happening in these matches, no human being could possibly observe and evaluate it all. We needed a way to capture and analyze every move from every player and feed all that insight into a ranking system that was totally objective and reliable.”

It is expected that the power rankings will prove to be a useful resource for coaches and players who will be able to improve and enhance their gameplay and tactics using the insights provided.

April 16 witnessed the publishing of the first edition Overwatch Power Rankings. After each new round of fixtures, the rankings will be updated.