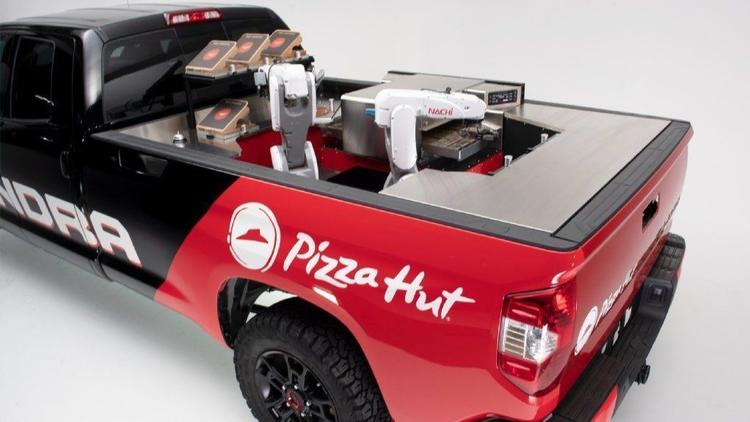 Pizza Hut, a unit of Yum! Brands Inc. is on its way to combine two of America’s favorite things, pizza and pickup trucks in order to shorten delivery times. As the competition in the fast food sector becoming more and more intense with time, such a step may prove gamechanger in the coming days.

Pizza Hut has partnered with Toyota for this purpose. And as a part of this partnership, It has revealed a mobile pizza factory operated by the robot in the bed of a modified Toyota Tundra. The prototype will be cooking pies on the go and that too within 6 to 7 minutes by using automated technology. This will help Pizza Hut expand its delivery area while consumers can get their pizzas hot, right from the oven.

“We’re bringing the oven closer to the consumers’ door; nobody is doing that, We are pretty obsessed with improving the customer experience. The more we can get closer to their homes or the point of delivery, the better and hotter the product will be,” Nicolas Burquier, Pizza Hut’s chief customer and operations officer in the U.S., said in an interview.

PizzaHut is trying to improve its lagging delivery performance, along with reaching customers beyond their sit-down destinations. So far, it has been a hard journey for them. In fact, the fast food brand has witnessed a surprise reduction in its same-store sales during the second quarter.

As of now, no date has been specified for the debut of the robotic pizza-maker. The announcement regarding the robotic pizza-maker has been released after Pizza Hut joined the Toyota’s mobility alliance in January. Although Toyota’s mobility alliance will work in the field of autonomous vehicles, the Tundra used for Pizza delivery will not be self-driving, according to Nicolas Burquier.