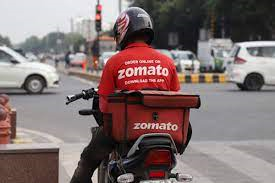 LinkedIn User Shows How Zomato Makes More Money Per Order Than the Restaurant Cost escalation 34.76% per order at INR 178.

Rahul Kabra, a well known performance marketing manager took to his LinkedIn account to put food delivery app Zomato on full blast. According to him, he was providing the proof that Zomato is making more money than the restaurant for every individual order.

In his post, he said that he is comparing the very same order, from the exact same restaurant, but one is ordered through Zomato and the other is ordered offline, directly from the restaurant.

He said that the price of the meal, directly from the restaurant costed Rs. 512, while on Zomato, that same order stood at Rs. 690 after availing a discount worth Rs. 75.

This means that the same order on Zomato costs him 34.76% more than ordering directly from the restaurant. 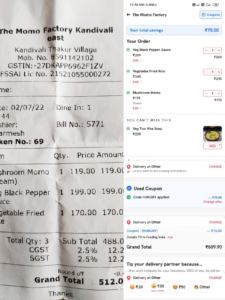 He went on to ask that if you assume that Zomato acts as a platform that increases the visibility and traffic to local restaurants, is it fair to charge such a high price.

He goes on to say that the there should be some sort of ceiling for these premiums that needs to be introduced and enforced by the Indian government so that all parties involved including the share holders will have something to gain.

He then says that, as time goes on, more and more people will come to the realisation that the price of their food on Zomato is unnecessarily high and will start looking for various substitutes or will just choose to order directly from the restaurant.

Customer acquisition is what is plaguing all employees as they grow and is the bane of profitability for many companies. Retention of the customer is what increases their lifetime value.

Zomato is one of the companies that are pioneers of omnichannel advertising. They pride themselves on their customer experience and mainly depend on that to retain their customers.

But at the end of the day, the price and how much we save is what is important to most Indians, and no matter how good the advertising and customer experience is, people will slowly move away from the app to get better deals and prices.

Customers will be willing to pay a bit extra for their orders, if they are ordering through a platform like Zomato, but such an elastic increase, will surely force many people to shy away from using the app and start-ups need to understand that customer acquisition is so important as there is always a substitute that can undercut them.

Zomato has since said:

Zomato is an intermediary platform between the customer and the restaurant and that they do not have any control over the prices that are set by the restaurant partners on the platform.

They went on to say that they have conveyed the feedback to the restaurant partner and have requested them to look into the issue.