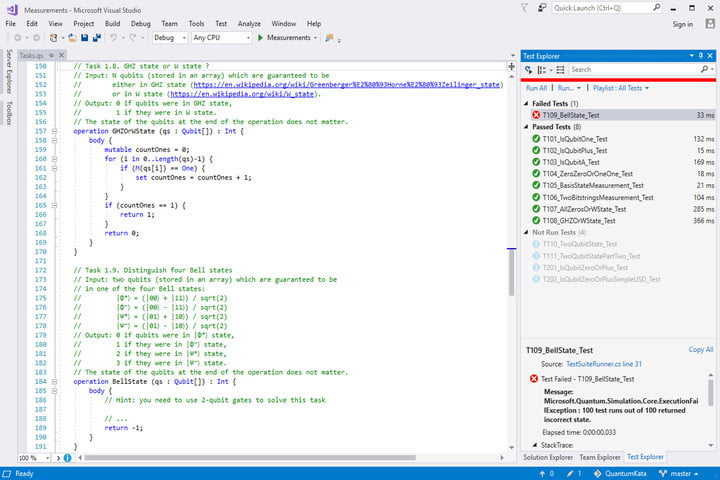 Microsoft just launched Quantum Katas, an open source project that does just that by providing you with tutorials for learning at your own pace. According to Microsoft, these exercises are based on three learning principles: Active learning, incremental complexity growth, and feedback.

“Each kata offers a sequence of tasks on a certain quantum computing topic, progressing from simple to challenging,” Microsoft Quantum Team states. “Each task requires you to fill in some code; the first task might require just one line, and the last one might require a sizable fragment of code. A testing framework validates your solutions, providing real-time feedback.”

Currently, there are only four katas covering basic quantum computing gates, superposition, measurements, and the Deutsch-Jozsa algorithm. Each kata is a stand-alone project containing a sequence of tasks progressing from trivial to challenging, requiring you to manually insert chunks of code. They also provide a testing framework that sets up, runs and validates your final code.

To use these katas, you need to install the Quantum Development Kit for Windows 10, MacOS and Linux. This kit is typically used to build your own quantum computing programs and experiments. It includes the Q# language and compiler, the Q# standard library, a local quantum machine simulator, a quantum computer trace simulator, and two other components. After installing the kit, you can grab the katas through Git or by downloading stand-alone copies in a ZIP file.

Microsoft’s katas arrive after the company hosted its first Q# coding contestin early July, challenging more than 650 developers and new programmers alike. According to Microsoft, more than 350 participants solved at least one Q# problem while 100 participants solved all 15. The problems ranged from generating a superposition of all basis states to creating a second array reconstruction algorithm. The contest winner completed all tasks under 2.5 hours, Microsoft says.

Given Microsoft’s Quantum Katas is an open-source project, the company welcomes all contributions and suggestions. “Most contributions require you to agree to a Contributor License Agreement (CLA) declaring that you have the right to, and actually do, grant us the rights to use your contribution,” Microsoft adds.