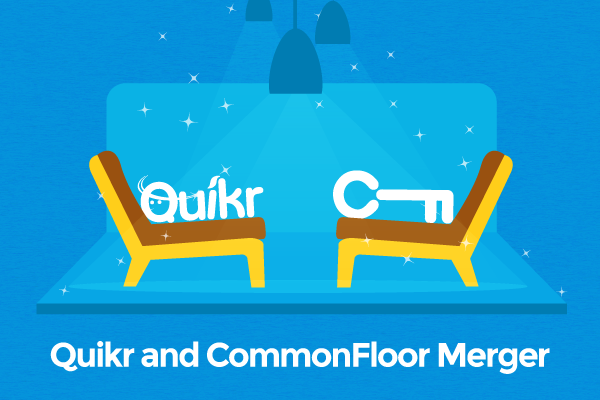 7 January, 2016, Bangalore: Quikr in an interesting move, takes over the CommonFloor just four months after launching Quikrhomes, reports ET. Though the company has not disclosed the amount, the deal was structured as a majority stock swap and values CommonFloor at around US $120 million, revealed sorces.

“The merger, which is expected to be completed over the next two to three months, will give CommonFloor.com access to Quikr’s 30 million consumers and harness the potential of the cross category nature of the platform, while QuikrHomes will benefit from CommonFloor’s structured data and domain expertise,” Quikr said in a joint statement.

Tiger Global-funded online classifieds platform Quikr, will continue to operate both the brands. Sharing his views on the development, Pranay Chulet, Founder and CEO, Quikr said, “We expect this transaction to not only accelerate the growth of QuikrHomes, but also our other verticals.”

Commenting on the deal, Sumit Jain, Co-Founder & CEO, CommonFloor opined, “We are excited about working together with the Quikr team and bringing more unique and compelling solutions to our consumers”.

Quikr is among one of the most preferred companies for the investors and till now, it has raised more than US $350 million funding from some of the big players such as Omidyar Network, Norwest Venture Partners, Nokia Growth Partners, Tiger Global, Warburg Pincus and Kinnevik.