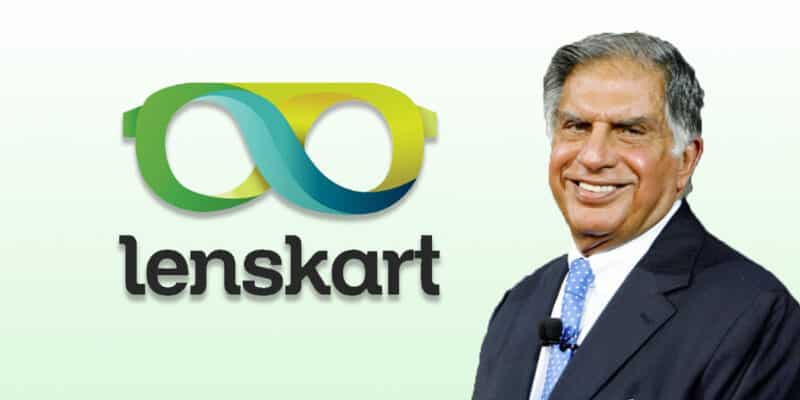 Ratan Tata, the man behind the Salt to Software conglomerate- Tata Group is an Indian businessman who is known to invest actively in Indian start-ups is reportedly taking an exit from one with almost 5 times profit compared to what he had invested a few years back.

Yes, the company that has grown to achieve the unicorn status with over USD 1 billion valuation in these past years and has recorded not so consistent profitability is Lenskart, the eyewear start-up company.

Lenskart is a Faridabad-based Indian online-based eyewear retailer that was founded back in 2010 by Amit Chaudhary and Peyush Bansal. According to multiple reports, Ratan Tata made an investment of INR 10 lakhs in the company back in 2016 and is making an exit from the same with 4.6 times the profit.

Entrackr further reports that Tata’s stake in the company will soon be taken over by an existing investor in the company. The eyewear start-up became a unicorn back in 2019 after USD 231 million investment from SoftBank Vision Fund. According to a report by Business Insider, Lenskart is also preparing for an Initial Public Offering.

According to the company profile on Crunchbase, existing investors of Lenskart include SoftBank Vision Fund, Kedaara Capital, Unilazer Ventures, Epiq Capital, Premji Invest, TPG Growth among many others.

Ratan Tata on the other hand is a very active investor in the Indian start-up ecosystem and is currently backing over 20 Indian start-ups including Urban Company, Cure. fit, Ola Ola Electric and others. The recorded net worth of the man behind the salt to software empire is close to INR 6,000 crore as mentioned in a report by Business Insider.

Lenskart has recorded phenomenal growth in a very short time and it is not that its profitability was consistent throughout its journey. Currently, the start-up has close to 535 operational retail stores in multiple cities across the country. In 2019, the eyewear retailer company recorded losses worth USD 27.8 crore. Before that, the losses in 2018 were recorded to be USD 118 crore and the trend has been continuously the same since 2016. However, in Financial Year 2020, Lenskart recorded profits worth USD 17.7 crore.

According to the company profile on Crunchbase, Lenskart has raised total funds worth USD 459.6 million in over 9 financing rounds. However, the COVID-19 pandemic must have hit the business hard which we will get to know by the end of Financial Year 2021. As mentioned earlier, the company is also planning to raise funds through an Initial Public Offering.