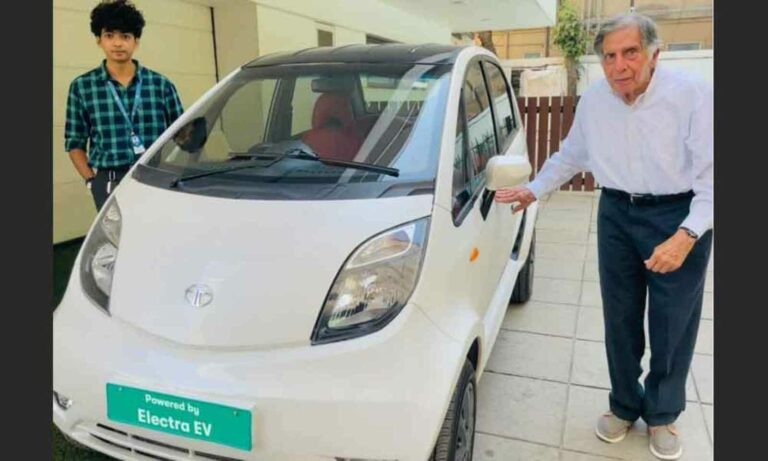 Electra EV founder Ratan Tata gets a custom-made Nano EV and went on a ride in the four-seater, as posted by Electra EV on Sunday. The vehicle is known to have a range of up to 160km and has an acceleration to go 0-60kmph in less than 10 seconds. The batteries used in the vehicle are super polymer lithium-ion batteries.

According to the post by Electra EV, Ratan Tata went on a ride in the “custom-built 72V Nano EV”. The powertrain is developed by Electra EV and they are receiving insights from the founder itself. This custom-built Nano EV has 72V Architecture. In order to increase the range, the company modified the design with an extended range from the 140 Km Variant of Tigor EV. The certificated range is about 213 km according to the Automotive Research Association of India(ARAI). The extended range comes without changing the boundaries of physical powertrain kit.

In the picture that is posted, there is also Ratan Tata’s executive assistant, Shantanu Naidu who is standing beside the white Nano. In the comments below the post, Shantanu stated that the car “glided more than it drove”.

Last month Electra EV reported that they are seeing a massive increase in demand since July 2021. Executive Director of Electra EV, Samir Yajnik said, “Based on the massive demand we have been seeing from July 2021 onwards, Electra EV aspires to double its revenues every financial year for the next two-three years, from the FY20 levels,”

Last year as the financial year ended, the company clocked Rs. 115 crore. It has been reported that the company is seeing a 10-fold jump in its demand. So much that till August they were making 100-150 EV kits a month, while the production increased to 1000 units a month. Yajnik stated, “The market has suddenly become wild. There is demand from every segment of the automobile market — from the fleet, personal, two-wheelers, three-wheelers, and even off-highway vehicles,”

Now that Ratan Tata is seen using the customized Nano EV, it looks like the company is also working on bringing back the compact city car. The production of the internal combustion version was halted in 2018 because of the losses incurred. Now as people are opting for electric vehicles, the Nano EV might be an interesting option. Electra EV also has been facing challenges with acquiring parts for their vehicles. As the availability of electronic parts from China has been challenging. As the demand is increasing the EV maker pre-booked orders for parts for the year 2022 (12 months).